Thanks for your comments on the Burda patterns. I also like 8018 and it was actually the one I set out to purchase until I started browsing the catalog and found the others. But I'm not making that one...yet. I want a jacket with a lining and feel that I don't have the time or experience to make a lining without having the pattern pieces and instructions to guide me, so I chose to make 8020. I found the perfect wool in my stash - 3 yards of a mid- to light-weight Pendleton wool I purchased from Fabric.com about 5 years ago. It was only $2.95/yard. Can you believe it? 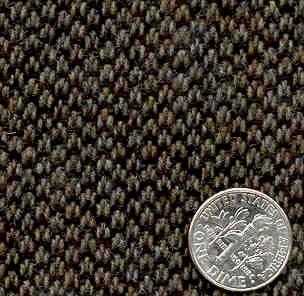 And while browsing my stash I found another wool that will be great for Burda 8030. It's 60% wool, 40% alpaca and is both plush and soft. It also looks good on both sides, so it would work well for this coat. I'd also like to make this pattern in a sweater knit, but just think it would be a great use for this wool too. 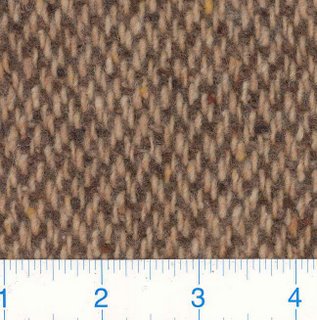 And that's not all. I'd like to make Burda 8018 in this lovely Pendleton wool I also bought at Fabric.com - not at the same bargain price as the other Pendleton but still pretty good at $9/yard. It's been "aging" about 4 years in my stash. 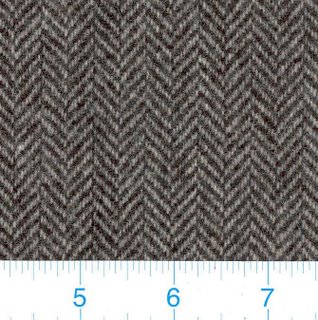 But do I need all these coats/jackets? I already have the wool and it's better to be out and enjoyed and put to use as opposed to packed away in a plastic bin (hopefully not being eaten by moths - that would be SO awful!).

Last night I moved on to stage 2 of the jacket project: preparing the pattern. I chose to trace all twenty-something (!!) pieces instead of cutting them out. I didn't want to risk choosing the wrong size. These patterns aren't 99 cent McCalls or Simplicity patterns. I've started to cut out the muslin so hopefully I'll be able to check the size and get going on the real thing. In Burda I fall between a 42 and 44. I've made some tops in 44 and thought they came out too big so I started making 42 instead. But something told me to go with a 44 for this one. I want to be able to wear this over more than a thin shirt and measurement-wise I really should be a 44. So a 44 is what I cut. We'll see.
Posted by Lori on 11/14/2006 1 comment:

How do you use those feet? 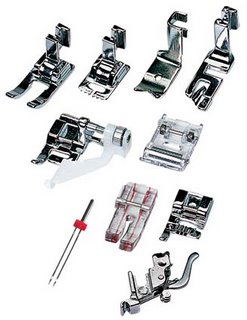 I keep my presser feet in a small plastic box next to my sewing machine and find the ones I most often use are the edge-joining foot, the zipper foot and the regular foot. I have many others - pin tuck, fell foot, ruffler, hem stitch... but I hardly ever use them. Mostly because I don't know how they work or haven't taken the time to experiment with them. Still, I feel like I should buy every specialty foot there is.
I just recently heard about this website that has a video* for every type of Pfaff foot. I just happen to have Pfaff so that's ideal for me, but I think all sewing machine manufacturers have pretty much the same type of feet. Now maybe I'll actually try a few more presser feet from my box. And judging from the list of videos, there are a few feet I don't have. Of course, do I really need those other feet?
*not sure if there's supposed to be sound. There wasn't for me, but my computer might be a bit messed up and the videos might not be playing correctly.
Posted by Lori on 11/10/2006 1 comment:

In search of a coat

Why is it that despite having over 300 patterns (yikes!) and at least five years of Burda World of Fashion magazines (double yikes!) I do not have a coat or jacket pattern that I like? But the new Burda Fall 2006 styles contained some that I do like and a few other patterns that caught my eye. Here are the new additions to my pattern stash (click picture for larger): 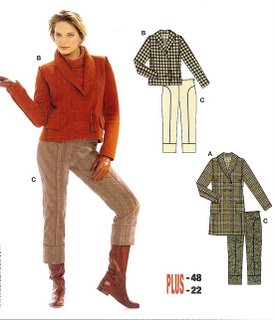 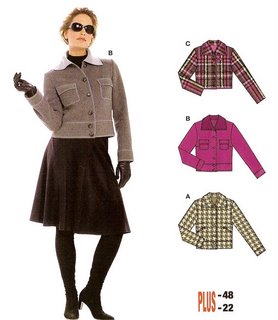 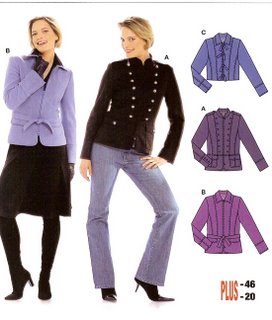 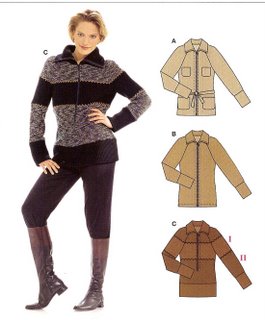 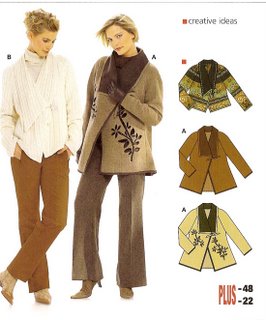 I especially like 8030 in the knit...and I have plenty of knits in my stash from which to make this and also 8026.

And speaking of knits, I have just about finished my top-down sweater. I need to seam the hood, make a cord and weave in loose ends. Yippee! First adult-sized, sleeved sweater that I'll be able to wear (because the first adult-sized, sleeved sweater I knit is still in pieces waiting to be blocked and seamed). I've already started on another project and it's coming along well. This one's a scarf out of Malabrigo merino yarn (colorway is Stonechat) using this scarf pattern. I've already gotten lots of compliments on it at my knitting meetup and also at my sewing guild meeting on Saturday.

I had a busy sewing weekend but I didn't get any sewing done. I had my sewing guild meeting and then yesterday I met up with some internet friends for an afternoon of chatting, fabric and pattern swapping, and eating. The pumpkins I've been working on are still sitting unfinished at my sewing machine and I'm anxious to start a coat. I'm leaning towards 8015 but haven't decided whether to make the long coat or the short jacket. I'm pretty sure I have some long lengths of wool in my stash. But 8015 is so cute and I like the lines of 8020 (view B).
Posted by Lori on 11/06/2006 2 comments:

The lazy way to clean 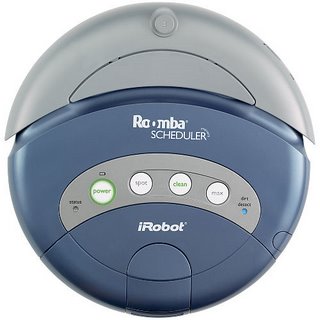 We bought a Roomba. We had thought about getting one and paused by a Roomba display at Costco the other night when a guy started telling us how great they were. I thought maybe he was a sales rep but no, he was a customer there buying a second one for his 2-story house. So we bought one. After all, we have 4 cats, 2 full-time jobs, hardwood floors that show off the dust and dirt really well, and a lot of other things we'd rather do than vacuum. I found that overall the reviews for this little robot are positive, but some people report having duds and others say it doesn't do what they want or they don't like how it bumps around or makes noise. The best review I read summed it up nicely by saying not to give up your primary vacuum. What this will do is sweep the floors daily... and provide entertainment for the cats at the same time. It doesn't do thorough cleaning of carpets and won't get into tight corners and of course it has to vacuum around your shoes, the laundry basket, and the toys strewn about (in our case, cat toys).

This machine is also not a "set it and forget it" type of tool. It requires frequent cleaning so that the sensors don't get too dirty (and cause it to miss seeing the steps and take a fall). You also need to keep the wheels clean so they don't get bogged down with hair and string - a very possible scenario with 4 cats, my long hair and fringe on our rugs. So we'll see how good we are at keeping up the maintenance. I still think that will be easier than vacuuming the whole house.

So last night in between going to the door for the few trick or treaters we had, we played with our new toy. The model we bought has a docking station, remote control, and virtual walls - devices that emit infrared while the Roomba is on and keep it from entering places you don't want it to go. We have hardwood floors in our house but in the living room and dining room we have large oriental rugs with fringe. Roombas "eat" fringe, just like other vacuums - and they'll also get hung up on cords and drag them...and the object attached to the cord, so you do have to Roomba-proof a bit. The Roombas do much better on hardwood and tile than on carpet and since our carpets quickly get covered with cat hair, we're better off using our Miele in those rooms. Our main use of the Roomba will be to sweep the floors of the kitchen, hallway, family room, and our bedroom. We'll keep it out of the sewing room/office because of the oriental rug in there and the plethora of threads and pins it might encounter. Besides, it's small room and the Roomba would spend a lot of time bumping around and I worry it might not get out of there and find its home base when it's done.

The Roomba does do a lot of bumping - it's kind of funny to watch it and guess where it will go next. When it finds a straight path it does a tiny wiggle from side to side as it goes, kind of like wiggling its hips if it had them. When it finds a lot of dirt, a blue light comes on and it goes around in circles, almost as if it's gleefully doing a dance. The cats do not know what to make of it. It is a bit noisy and beeps when it turns on, beeps when it's time to go home to its base (after an hour of cleaning) and it also beeps an "uh oh" and shuts off when you pick it up. So far we haven't seen it get stuck. It's gone over small rugs and the transitions between tile and wood without too much trouble. It did try to "mate" with the base of our fan but it finally got itself back on level ground and went about cleaning. It does pick up quite a bit. The dust bin is small but that's probably both to keep the size down and also to make you tend to the device regularly.

It'll be nice to have the rooms swept of cat hair, cat litter (ugh!), crumbs, and other grit and dust bunnies while we're away at work. Hopefully this little guy will keep working away for a good long time because I think we need him!
Posted by Lori on 11/01/2006 4 comments: