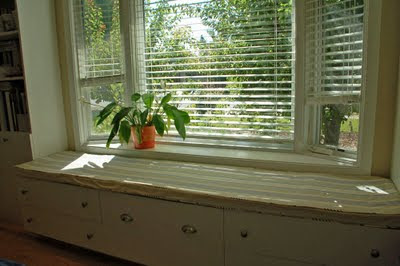 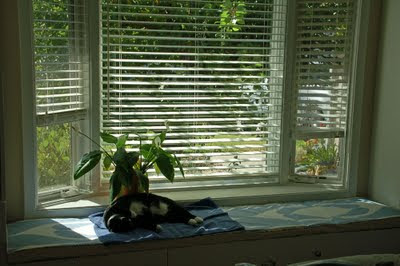 One side is striped and the other is the blue and white print.


Pattern used: none, but I consulted Sandra Betzina Sews For Your Home for help with construction.
Fabric: heavy weight cotton from IKEA

Notions: One "endless" zipper, it's one long zipper sold with multiple pulls and meant to be cut to the length you need. I found it cheaper than the ones sold for home dec and the lighter weight zipper was prettier and opened and closed nicer than the metal upholstery zipper I had. For the piping I used cotton craft cord, which I found in the craft section of Joanns. It was the thickness I wanted and turned out to be much cheaper than the upholstery cording (which was either too thick or too thin). I soaked the cording in hot water to pre-shrink it. The inside cushion is 2" thick washable polyester cushion from Hancock Fabrics.

Construction: I don't know why it took me so long, except that I've never sewn a box-shaped, zippered cushion cover before and thought it would be difficult. It was cumbersome to deal with the long lengths of fabric, and I don't know how I can measure so carefully and still have things come out too long or too short on one side vs. the other (!!). But overall it wasn't that difficult to make. I put the zipper into the back size piece first and then sewed all the side pieces together. Then I sewed the piping to the side pieces. Next I sewed the top and bottom pieces to the side pieces along the long edges. I thought the corners would be difficult but this didn't turn out to be the case. I was able to sew along the end edges and the piping just sort of naturally curved at the corners. I finished the raw edges by serging them. Due to the bulk of the fabric I had to use my special serger piping foot so that the piping could ride in the groove of the foot and the edge could be serged.

The challenge now will be keeping it clean. As you see, the cat approves of his new sleeping bed, although I think he would have preferred me to make it out of the fluffy "yeti" blanket he enjoys on the guest room bed. 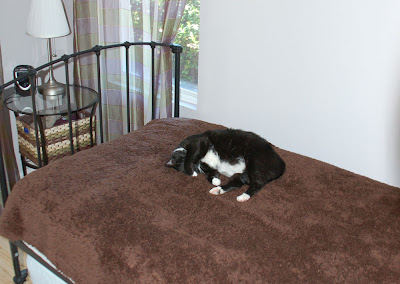 A problem at the launch site has delayed the launch. First it was delayed one day but now it has been delayed again. It might go Tuesday evening but we'll find out for sure tomorrow morning.

Meanwhile, I have some software to write at work and some drapes to hem at home...gotta get some sewing news in there somewhere!

And I haven't forgotten to post more photos from our trip - it just takes so much time to weed through the 1839 photos we took. I've managed to write captions for all of the ones from Berlin, but it takes a lot of time to research the correct names and places. It's sad when you have a picture of a building or scenic view and you have no idea what it is. Even sadder if the photo contains people. I remember my grandmother, who was always snapping pictures on her Instamatic, urged me to identify people in photos. I'm grateful to her and other relatives who took the time to do that on the photos I've inherited. The software I use to catalog my photos (Adobe Elements) makes it very easy to add captions or tag photos with people's names, so there's no excuse not to do it - it just takes time.
Posted by Lori on 7/11/2011 No comments: