It's just a nightshirt, but it is another sewing project completed: 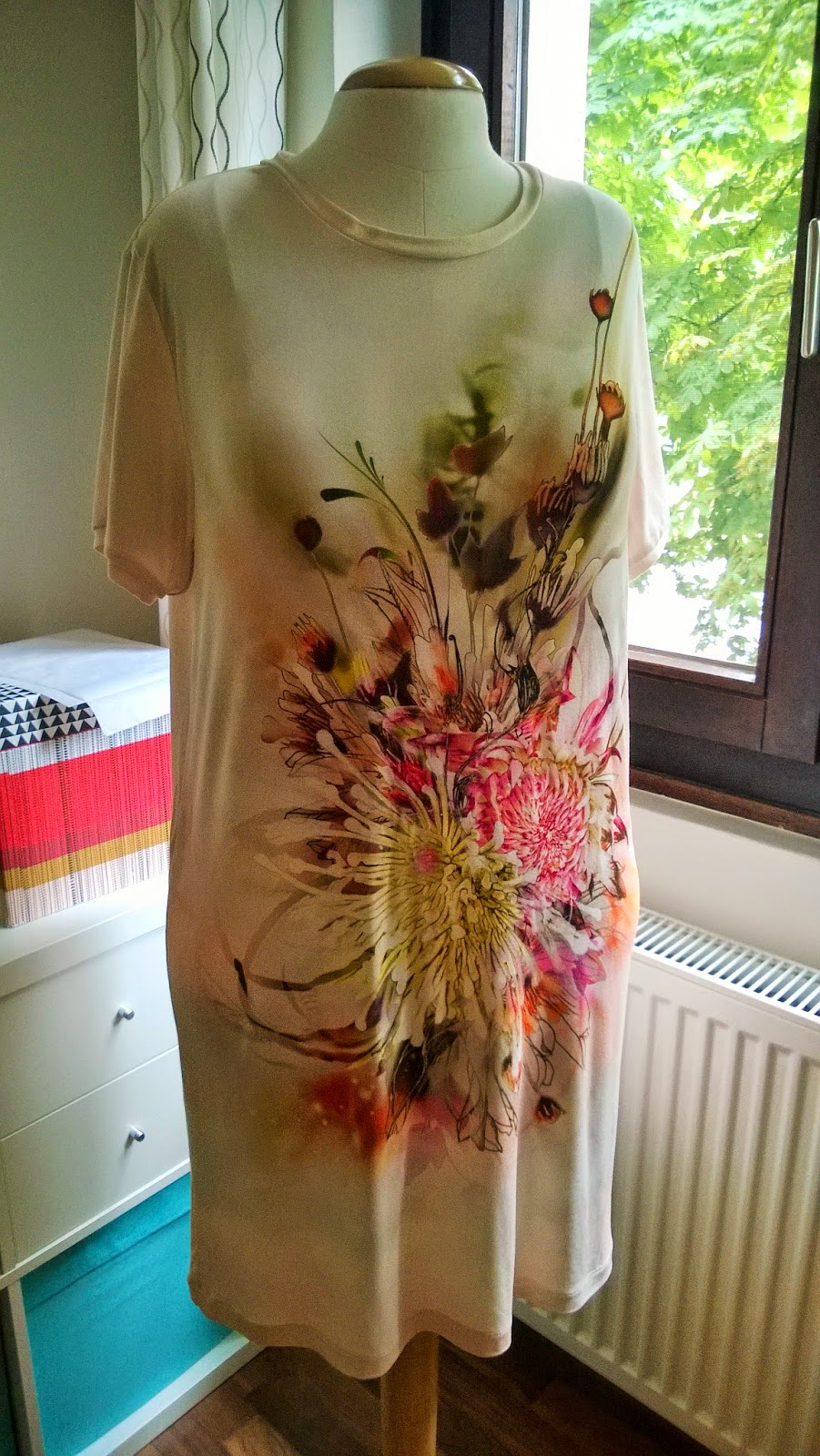 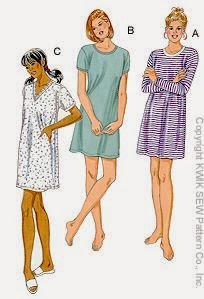 The fabric I used is a thin, drapey cotton-viscose (rayon) remnant I found at the department store fabric section. I was drawn to the print but immediately knew I wanted to use it as a nightshirt. I really like the way the flowers look like they're hand painted, and if I were an edgier, artsier person, I would have made an edgier, artsier top out of this fabric...but I'm not, so it's just a boring nightshirt. The print is a panel-print on only part of the fabric: the flower motif repeats every meter with nothing printed on the other half of the fabric. I used one motif for the front and decided to use the plain fabric for the back, sleeves and the bands on the neck and sleeves. I used my serger for almost every part of the construction so it was fast and easy.
My next project will be a bit more interesting (I hope). I'm making the BurdaStyle top in the picture below, though you can't see it very well in the model's photo. 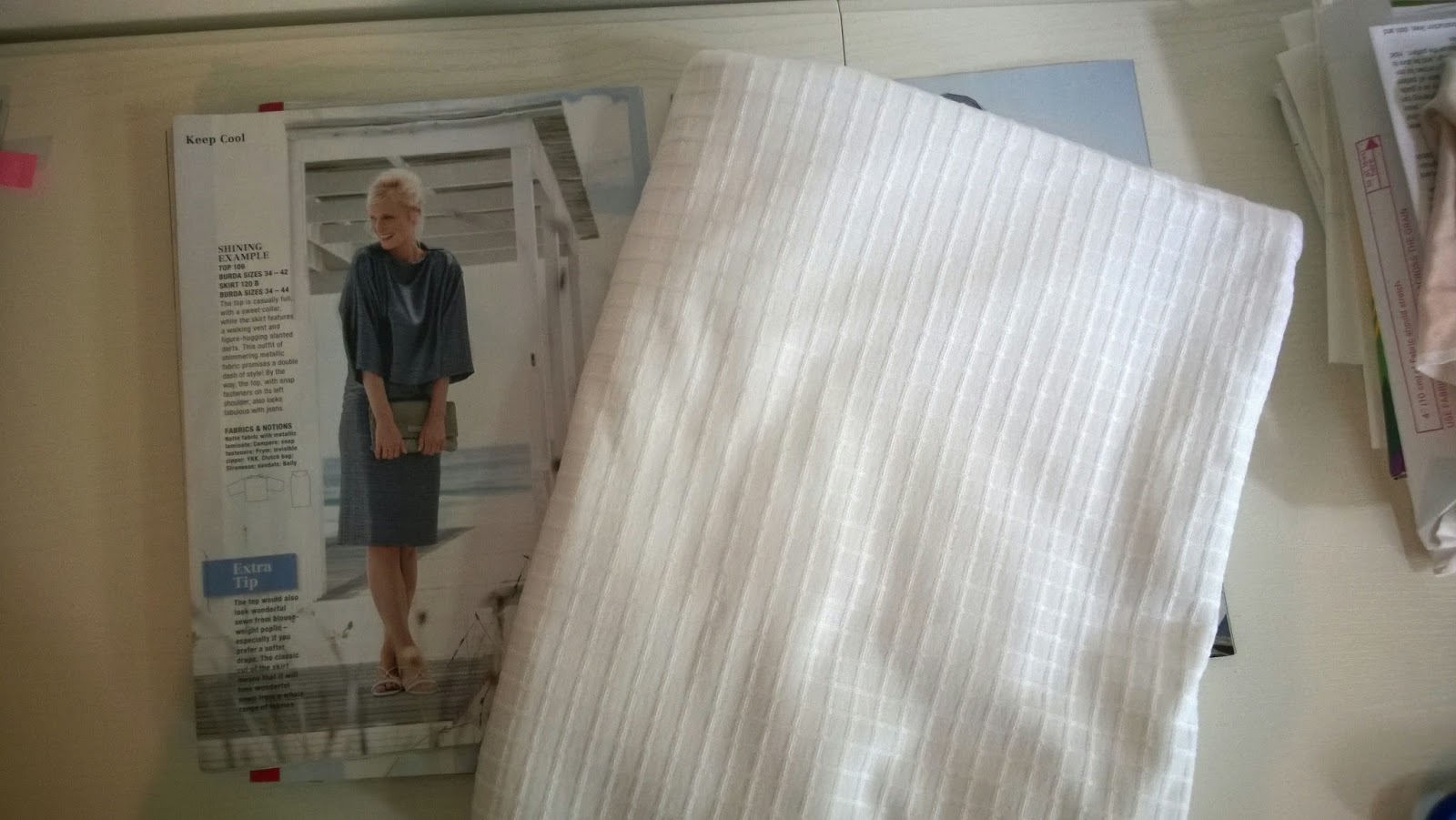 I'm thinking of making some minor changes to the sleeves and front, but we'll see. I won't have a lot of sewing time in the next couple of months because we have trips to Croatia, Norway and Paris planned, and family is visiting. It's going to be a busy summer!
Posted by Lori on 6/25/2014 No comments: 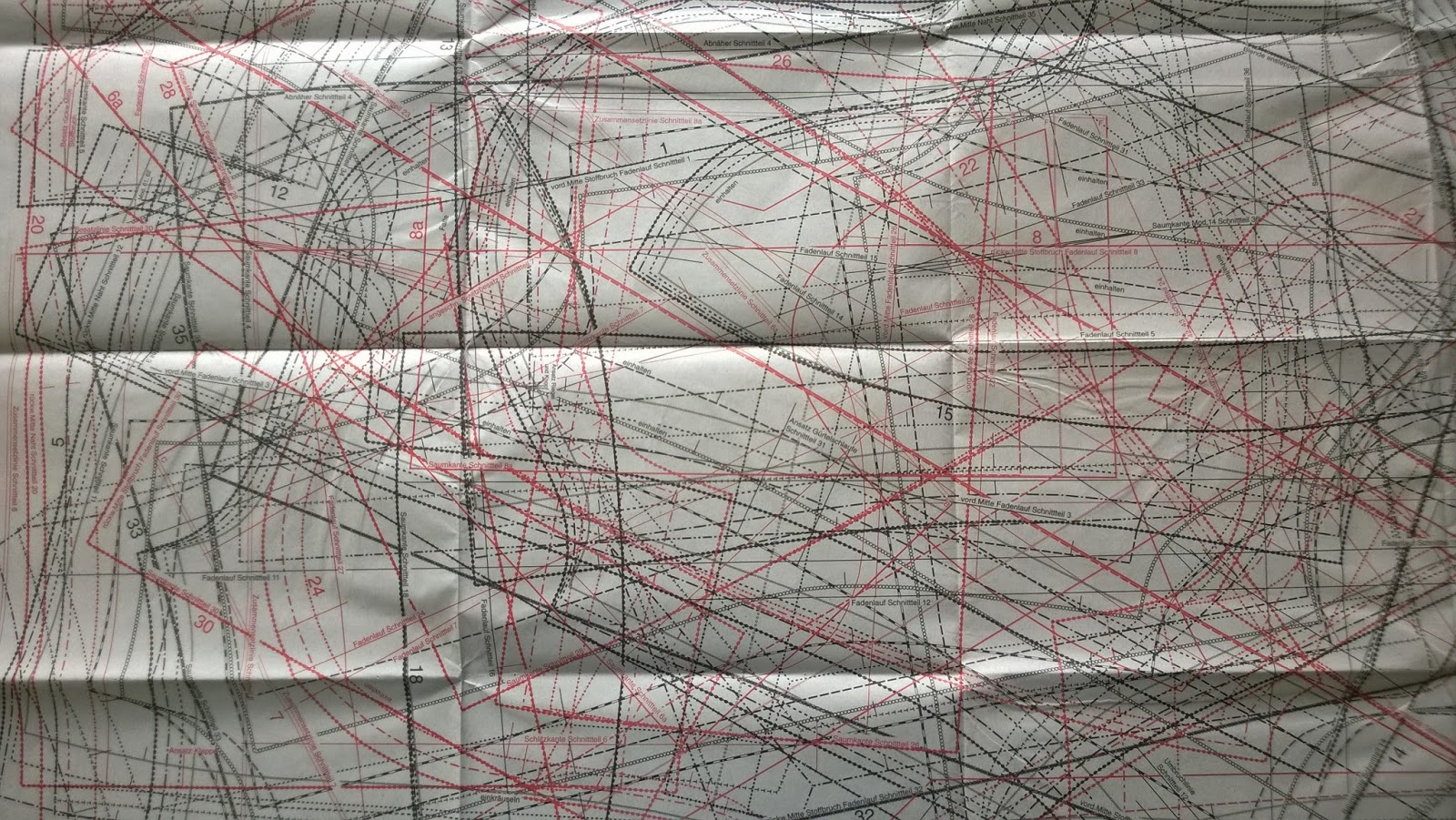 ﻿
Meine Nähmode is a German pattern magazine that reprints Simplicity and New Look patterns. I think the magazine is a bargain at about $7.50 (€5.50) for 12-13 patterns (especially because I can't get Simplicity and New Look patterns here), but not all sizes or views are available and I have to trace the pattern. Somewhere in that black and red spaghetti mess are the pattern pieces to New Look 6150:

How I add seam allowances

I made a short video to show how I use a 6 inch quilting ruler to add seam allowances to traced patterns. I use this method when I trace patterns from BurdaStyle and other European sewing magazines since they don't include seam allowances. 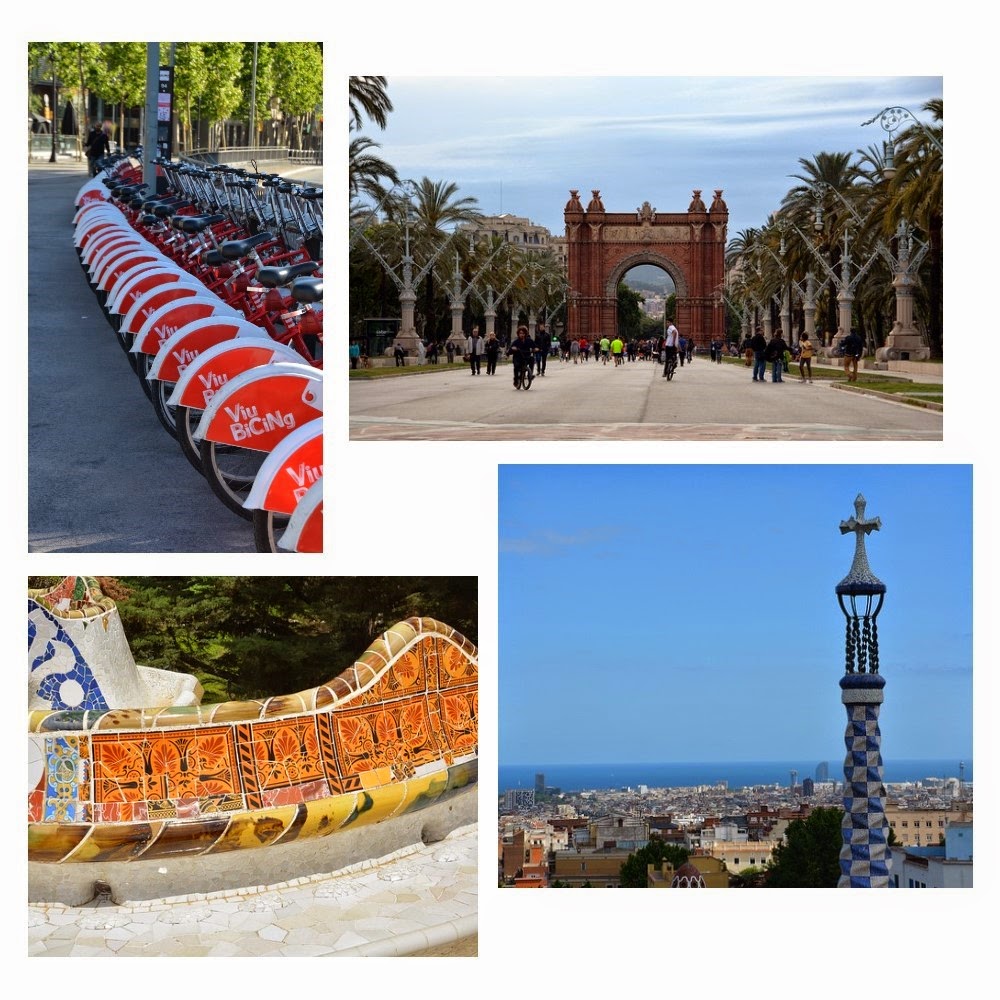 I'd been wanting to get here for many years and finally did. It was a lovely long weekend. You can see many of our pictures here on Flickr. (The Flickr interface may show you a sort of collage of all the pictures - you can click on the first one to see it and the description I wrote about it and then step through each one)

Of course I had to find the yarn and fabric stores.

﻿ There were two other fabric stores on the same street as Ribes & Casals and they were all bustling on a Saturday afternoon. So nice to see people sewing...or at least buying fabric. Ribes & Casals was the largest with two floors - the lower floor appeared to be all thread and notions and stuff while the main floor was filled with tables piled with rolls of fabric. Though none appeared to be very high end, the quality seemed good and the prices were very nice - at least half of the prices I've seen in Germany.


﻿
The yarn is lace-weight merino/silk from Great and the Fibers, and the fabric is a polyester knit jersey. And of course I had to get a Patrones. I can get them in Germany but for almost 3x the price since they're imported here.

Knowing how to sew means never having gaping armholes...

I made this top from Kwik Sew 2844. I've had the pattern for so long now that it is out of print. 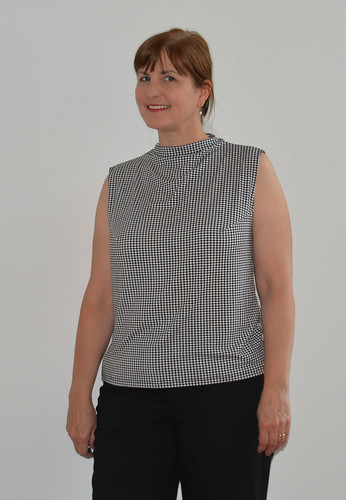 It was a really simple thing to sew, just two pattern pieces and only shoulder, side seams and hems to worry about. However, when I put it on I had quite a bit of gaping in the front armholes and my bra was visible. Not good, but sadly also not unlike what I see a lot of women wearing. This pattern and, in my opinion, a lot of cheap RTW clothes like it, are not designed for someone with breasts! I wasn't going to wear it as-is nor did I want to throw it away, so I made bust darts to close up the gap and make it fit better.  And yes, I do seem to be in a black and white phase - out of the last five things I've made, four have been black and white. There is more colorful fabric in my sewing queue.
Even though it's out of print, here's the Kwik Sew pattern info and my review: 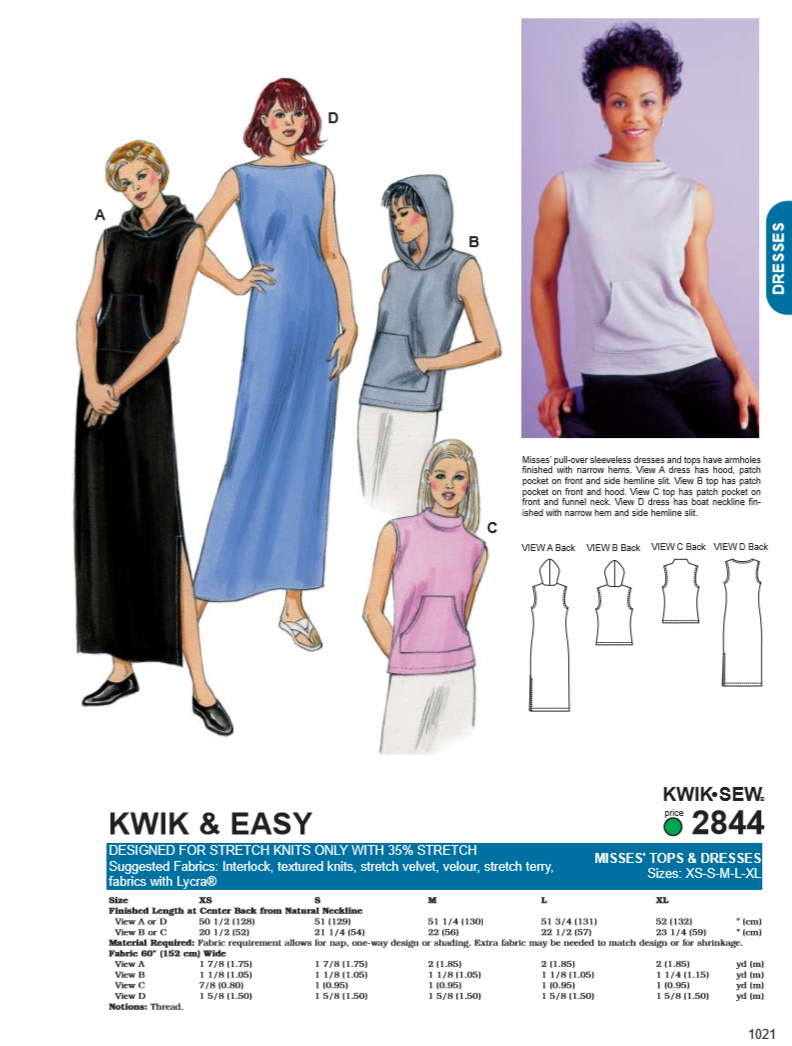 Fabric Used: 4-way stretch cotton lycra, with perhaps a bit too much stretch for this pattern but since I ended up making it less-snug the fabric drapes rather than clings, which is a good thing! I've had this fabric for a long time too, almost as long as the pattern.

Did it look like the photo/drawing on the pattern envelope once you were done sewing with it? Yes, but I left off the front pocket and added darts.

What did you particularly like or dislike about the pattern? I liked the simple lines, wider shoulder (hides the bra-strap well), and I think the funnel neck is a nice change from a plain round or jewel neck. I've had this pattern for a long, long time. I'd envisioned it in the fabric I eventually made it in.

Pattern alterations or any design changes you made: I added the bust darts after I'd sewn it up. My measurements put me between the medium and large sizes in Kwik Sew, but the large ended up a bit too big and I had major "gap-osis" in the front armhole. I pinned out the excess into a dart and adjusted the hem of the armhole as best I could. Since the shoulders were a bit too wide as well so I had to adjust the armhole hem anyway. In hindsight I maybe should have started with the medium and done a FBA and added a bit to the waist.

Would you sew it again? Would you recommend it to others? I may make this again - with darts. Or I may experiment with the medium size and a FBA. Since I've never done a FBA, this may be a good pattern to try it on.

Conclusion: The top turned out really comfortable. I shouldn't have waited so long to make it!
Posted by Lori on 6/02/2014 No comments: