When I'm not sewing

I buy patterns. And sometimes fabric, but fortunately I only bought patterns this time. Both Joanns and Hancock Fabrics had pattern sales this past weekend.

Vogue 2896: I envision this jacket in a silk dupioni. I reviewed my stash and of course I have silk dupioni. Um... like four different colors to choose from. 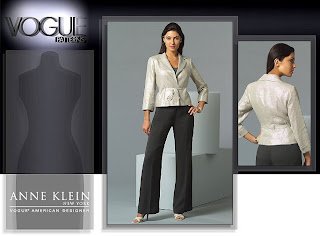 Vogue 8353: Cute! I would choose a solid or small-print fabric though. 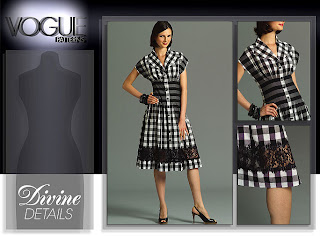 Vogue 8326: I bought this one for the ruching of the bodice, not the sleeves. Those sleeves are a bit too dramatic for me. 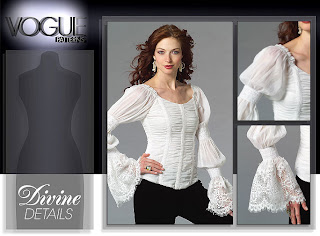 Simplicity 4193: I like the halter top as a top or dress and I also like the skirt. 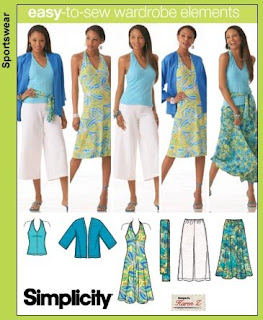 Simplicity 3956: This one looked very familiar to me in the store and I thought I might already own it, but I couldn't find it in my sewing room. And I'm sure there's a Burda WOF pattern close to it, but for $1, why not? 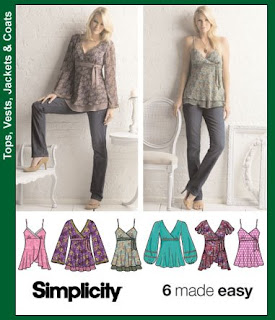 Simplicity 3918: This top is a pretty common style right now and might very well be in my Burda WOF issues, but again...$1. 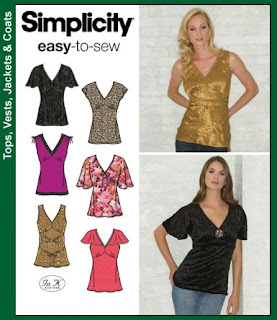 Simplicity 3893: Hmmm, there's a theme of floaty-summertime tops here. This one can also be done in a knit. 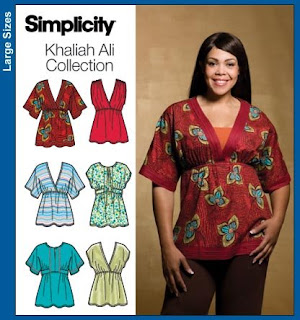 Simplicity 3867: Yet another floaty top. This pattern has been featured a lot lately. It's on the cover of the new Threads publication Sew Stylish, and a number of people on patternreview and in the sewing-blog world are expressing interest in making it. And not a bad deal to get patterns for a dress, top, shorts, jacket and handbag for a buck. Woohoo! 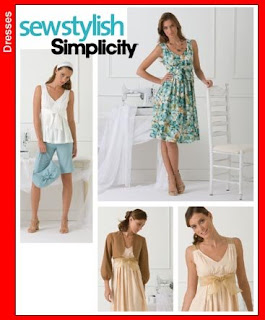 Now if only the sewing fairy would come and block off a lot of quiet, uninterrupted sewing time for me. When I'm not working (or blogging or reading blogs) I'm knitting. I've been knitting-crazed for a while now. And this weekend is Stitches! I've been looking forward to this weekend for months! So the sewing will have to wait a bit.

And just in case you're wondering what happened to the Burda jacket pattern, well it's stalled. I've been too busy knitting. But at the rate I sew, the jacket will be done for fall and I'll have to hope that floaty-summertime tops are still in style next summer. I never did finish my tiered skirt I started last summer out of my Paris fabric and now I read that tiered skirts are so last year. I still want to finish it and I'll wear it to work anyway because (most of) the people I work with are so unfashionable they won't notice. Casual-Friday is every day and you don't want to see what they wear on Friday. There's one administrative assistant I occasionally see who is very into style and clothing. I passed by her one morning in my faux shearling coat (bought from Macy's) and she complimented me on it. I'd better not wear my tiered skirt around her - she might inform me how it's so last year.

What can you make with a yard of fabric? 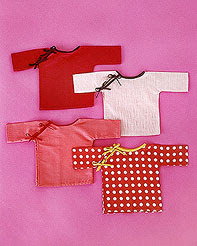 A basic tote bag (from sewing.about.com)
or a shoe bag: (from CranstonVillage) 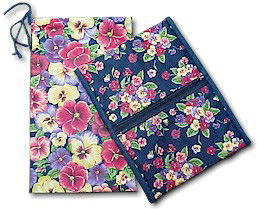 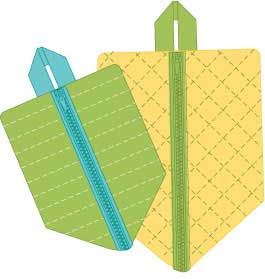 or bags (from Thimble) 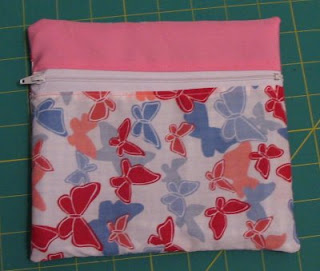 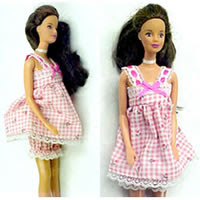 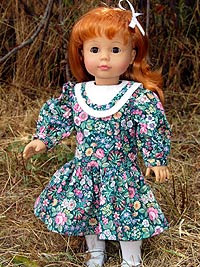 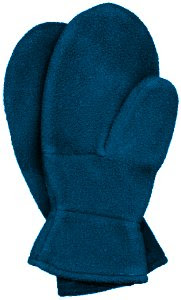 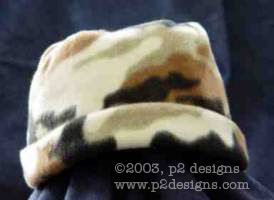 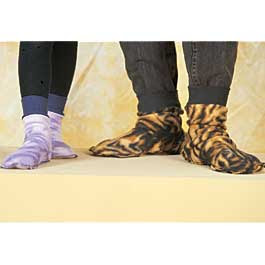 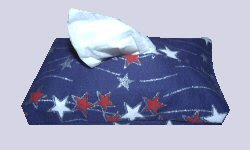 Purses: a free clutch purse pattern from Kwik Sew or use directions (from sewing.about.com) to make these: 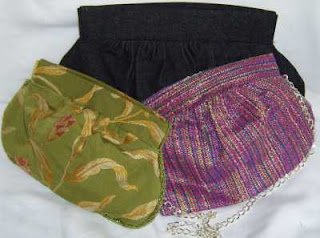 Stuffed animals - Carol's Zoo patterns are great for this – only 2 pieces!

More free patterns on the internet – not necessarily all for less than 1-yard of fabric but quite a collection! 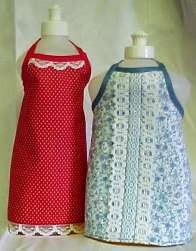 The week in a nutshell

Seems like the last week has gone by in a blur. Last week I had to travel to Phoenix for 2 1/2 days of meetings. I took advantage of the time cooped up in the airplane to knit. I'm working on a sweater for my new niece, who should be coming home from China with my brother and sister-in-law any day now. The front and back of the sweater are done and I started the first sleeve on the way to Phoenix and finished it on the trip back.

I had some time before catching my flight home so I took advantage of it and went shopping in the Phoenix area. I checked out Fiber Factory in Mesa and I was glad I knew ahead of time what to expect, thanks to reviews on the knitty.com "coffeeshop" board. Fiber Factory is a nice big store with lots and lots of fiber, including roving and manufactured yarn. The magazine selection is really good - I picked up the Spring 2006 issue of Spin-Off, which I'd regretted not purchasing last spring when it came out. That issue has the most adorable knitted sheep hand puppets with the bottom half done up in Fair Isle. What Fiber Factory lacked was really cool yarn and staff who greet the customers. Unfortunately it's not the first yarn store I've been in where the staff were too engrossed in conversation with customers/friends to say "hello" and if I did have a question, I wouldn't know who to ask because it's not obvious who works there. The store is probably fine if you're a local, but not very welcoming to the visitor and a new knitter would feel especially unwelcome. But their unfriendliness to new people didn't keep me from shopping, as it might have when I didn't know much about yarn. In addition to the Spin-off magazine I bought a few skeins of some Italian yarn that caught my eye.

I couldn't leave Arizona without finding a fabric store. Last time I was there I went to Sally's in Mesa. It was ok but this time I was in the mood for nicer fabrics. I went to G G's Fabric Gallery in Scottsdale. The difference between the customer service at the yarn store and customer service at this fabric shop was like night and day. G G's is a small store that carries high end fabrics - not all are evening wear fabrics, most are just very nice cottons, silks, and wools from which to make nice clothing. The owner was the only one there and she greeted me the minute I set foot in the store. She was eager to tell me about the fabrics and pull out the bolts, which were nicely arranged in groups based on color palette. I have to admit that if she hadn't talked to me and asked me about my sewing, where I was from, etc., I might have looked around a bit and left. The prices were much higher than I'm used to paying and really ever considered paying, but I splurged and bought 2 yards of a nice cotton/lycra print that I think will make a beautiful skirt. It will be an expensive skirt, but hopefully it will be a nice one. I felt I deserved to splurge. I'd had a tough 2 1/2 days of meetings and I worked from the hotel room each night until late.

However, a few hours later I thought I was being punished for buying the expensive fabric, as a whole slew of problems ensued. My PDA quit working, fortunately after I'd used it to navigate to the airport. Upon arriving at the airport I learned my flight was delayed one hour because the plane hadn't arrived there from Denver. I decided to work on my laptop but found it wouldn't boot. This was really bad because it wasn't my work laptop but my personal one. The morning I left for Phoenix, I realized I'd forgotten the power cord to my work laptop so I brought the Mac PowerBook from home instead. It had worked fine up until then so I didn't know what could be wrong. When I finally got to board the plane I discovered my seat had been reassigned to someone else. A broken latch on an overhead compartment threatened our departure again but some maintenance guys fixed it. With everyone seated and all of their bags stowed (finally!), we pulled back from the gate. Then the lights on the plane went out and came back on and the pilot told us there was a problem with the air conditioning and maintenance would have to look at it. Two hours later and more than three hours from when we were supposed to depart, we took off. I finished knitting the sleeve but couldn't start the next one because I'd packed the smaller needle size I needed for the ribbed cuff in my checked luggage. Ugh.

But everything turned out ok in the end. There were no more problems with the plane. The Mac booted fine after taking out the battery and putting it in again. My PDA has a switch on the side that turns off the screen inputs and buttons and yes, the switch was in the lock position. Good grief.

Normally I'd be looking forward to a relaxing weekend but I invited some friends over to watch the Super Bowl. So instead we spent the weekend cooking, cleaning, and getting ready for our "small" Super Bowl party. It was small because there were only 5 of us but we cooked enough for 3 times that. Ah, but it was fun to have an excuse to cook, the house is now clean, and we had a great time even though Chicago lost. The menu for the party was Polish in honor of "Da Bears" and also because my husband and two of our friends are from Chicago and are familiar with the food (and/or of Polish origin).

Here was the Polish menu:
And the non-Polish food:
We had too much food but we sent our guests home with leftovers and we have food for at least the next few days, if not the whole week. And I'll have more time for working on my knitting and maybe even my sewing!
Posted by Lori on 2/05/2007 2 comments: