I finally uploaded some photos from my trip to Iceland last July. Click here to view all of them on Flickr.

I went to the Pacific International Quilt Festival last weekend and the quilts there just blew me away. The workmanship and the artistry were just amazing. Here's a sampling of some of my favorites: 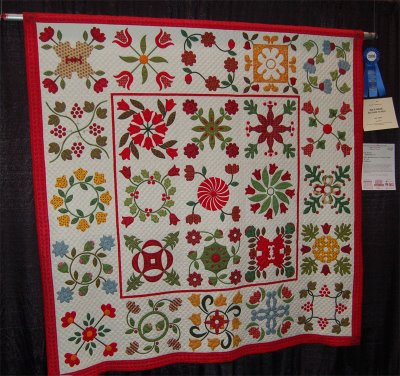 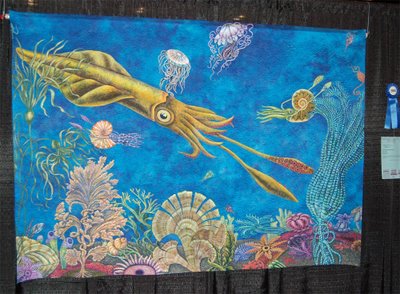 Here's a closeup of some of the detail on this quilt -- 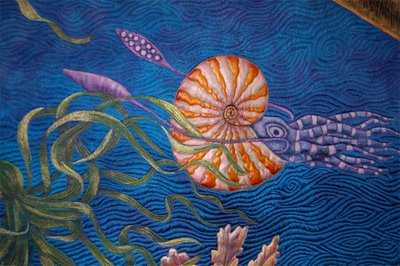 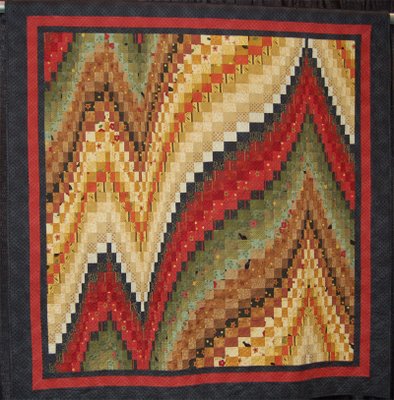 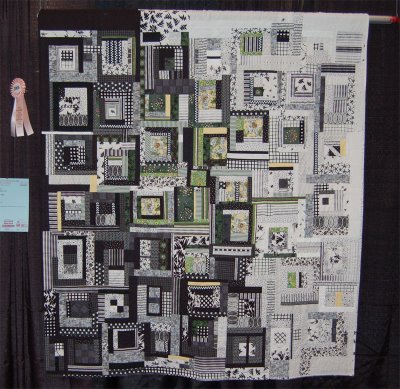 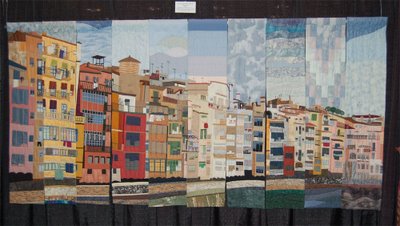 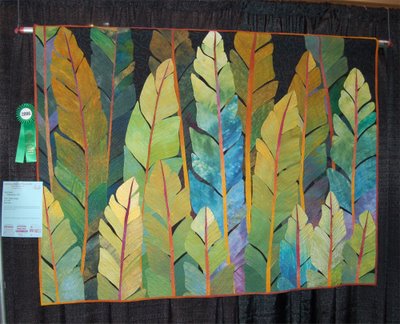 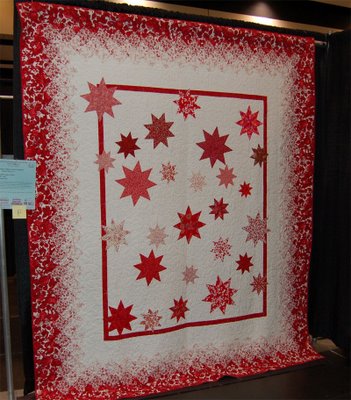 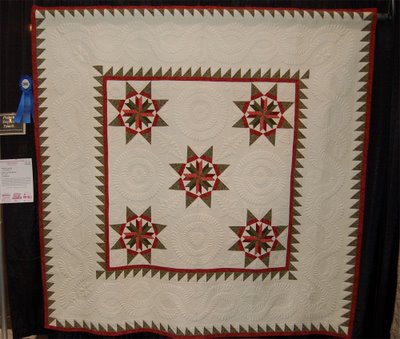 In addition to the local competition, they had a display of quilts from Canada, Australia, Britain, Germany, Norway, Italy, Japan, Brazil, and South Africa. This one is from Britain: 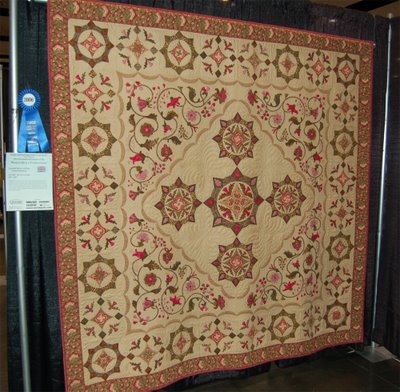 This one from Japan was considered the "Best in the World": 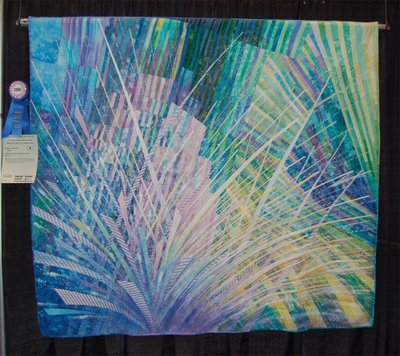 It was an amazing selection of quilts and wearable art. I'd gone to this show about five years ago and it's now double in size. There were vendors of course. Oh yes, there were vendors. There was something for every type of quilter. I bought some fat quarters and some patterns. I actually spent two days at the show. I went on Saturday and shopped and attempted to see all of the quilts, but I didn't have all day because I first stopped by the grand opening of Purlscence Yarns in Sunnyvale. By the way at Purlescence I bought some lightweight Socks that Rock yarn in the Smoky Topaz colorway from Blue Moon Fiber Arts and some Merino wool from Malabrigo. Yummy yarns! I was exhausted by the end of the day but since my $12 entry fee on Saturday was good for Sunday too, I decided (with a little persuading from my husband) to return. This time I took the camera and leisurely enjoyed the quilts as if I were in a museum. And it really was like an art museum. Such talented quilters!

Last night I dreamt that I was sewing. It must be on my mind.

Where has the last week (or two) gone? Oh yeah, I was away on a business trip last week. I used all that boring airplane time to knit 1/2 of a sock. I'm using a pattern from Sensational Knitted Socks that makes a mock cable. You start with a basic 3 stitch rib but every third row you K2tog the first two knit stitches of each knit portion of the rib but before you take the stitches off you knit again into the first stitch. This makes a little twist. It also makes the whole sock twist a bit, which I hope is not going to cause a problem when I wear them. I turned the heel so right now I'm on the gusset decreases where I have to keep track of decreasing every other row but also keep track of working the pattern stitch every third row. This is too complicated to do without paper and pencil, so the socks are not a commuter-knitting project. It was amusing to watch my airplane seat mates glance at me (out of the corner of my eye) every time I'd whip out my notebook and make a note. They probably wondered what the heck I was doing. I was squished in the middle seat for all of my flights so knitting kept me sane...and kept me from fidgeting. I am a terrible "fidget-er." It's a wonder that I'm not thin from burning calories fidgeting (and a darn shame!). I guess I still eat too much.

By the way, on United flights of more than 3 hours they will sell you a box of snacks for $5. It's actually not too bad because unless you bring food from home, it'd cost more to buy snacks at the airport. I tried the "Right Bite" box which was OK if you don't mind stinky tuna and hummus that's a bit thin. On my return flight I tried the "Mini Meal", which I didn't like as much. The salami was greasy and there weren't enough crackers to eat with both the salami and the cheese.

While I was out east I visited my mom and we did a bit of shopping in Old Town Alexandria, Virginia. It was a lovely day, even a little bit warm, so we enjoyed a nice lunch and stepped inside a few stores. One we visited was Chico's. I'd never been in one and have only heard of the store through its catalog, which I know a lot of women use for inspiration for sewing. I was impressed with at least this Chico's store in Alexandria. The people responsible for the store's displays did a fabulous job of putting together outfits and pairing them with jewelry and accessories. If I didn't have the "I can sew that" bug in my ear, I might have made some purchases. I made a note to check the website when I got home but I have to tell you -- ho hum. Not impressed. I was hoping to find the same great looking outfits...and I admit, use them as inspiration and probably not buy anything. But to me it just looked like any run of the mill online store. They showcase each item on a model, pretty much by itself. It doesn't even look like the stuff I saw in the store. I mean how much more unattractive could this be? 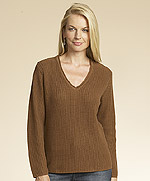 While in Old Town, I also checked out some shoes and boots. I desperately want some brown leather boots in a low to medium heel. But I have large calves. I like to think of them as shapely but unfortunately most boot-makers don't account for shapely calves. I check out Zappos.com almost daily hoping for a new shipment of perfect brown boots that will accommodate my ample lower extremities. So far nothing has come up to my liking. I tried some boots on last night at Bloomingdales. Oh they were luscious and I wanted them to fit, but the zipper only went halfway. It's not fair, this discrimination against the fat-calved. I've also found that some boots only accommodate large calves in the wide and extra wide widths. My feet are not wide, only my calves are. I did find another online source for wide-calf boots, which I may try. Silhouettes deals in clothing for larger women and also carries wide-calf boots. I never considered that women who wear large sizes in clothing also have a problem with finding boots to fit. Welcome to their world, I guess. I'm eyeing a pair there and may order them but I keep hoping Zappos will come through for me because I soooo love their free shipping and free return. I despise having to pay shipping to return something that doesn't fit. Edited to add: drat - the boots at Silhouettes that I wanted are on backorder until January 2007. Oh well.

I hope to get back to sewing this weekend. The brown tiered skirt is still in pieces. I'd really like to finish it...and wear it with some fabulous brown boots. Sigh.
Posted by Lori on 10/06/2006 2 comments: