I've watched the sewing community's interest in Style Arc from afar. The patterns look nice and the sketches make the designs look very appealing. Also, and maybe most importantly, the patterns have gotten fairly good reviews overall. But at $10-$12 (US) a pattern + the shipping from Australia ($$), I haven't bitten. Also, they're single-size patterns, so you better get your size right! They do sell some of the patterns in multi-size versions through amazon.com, which in addition to helping with the size issue also helps reduce the shipping costs. And I hear you can buy their patterns as pdf files on Etsy, but they're still pricey at $7+ (US) and you have to print them out and tape them together. I'm not a fan of pdf patterns - I'd rather trace. In fact I have two free pdf Style Arc patterns and I haven't attempted either one yet.

I think too that what's keeping me from buying any Style Arc patterns is that the designs remind me of patterns I already have, mostly among my many Burda pattern magazines. I received an email from Style Arc advertising their March patterns and at first glance I really liked them - a dress with a boxy jacket.

I thought maybe I'd break down and buy my first patterns from them but then I browsed my Burda collection. Just add sleeves... 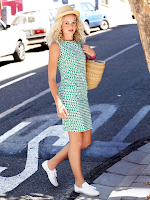 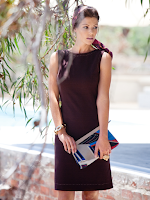 I couldn't find as close a match for the jacket but these aren't too far off: 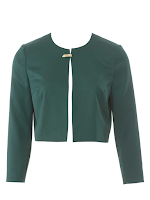 So I guess I'll just stick to my Burdas for now, especially because I have sewn Burda before and know that they fit me. Sorry Style Arc.
Posted by Lori on 3/02/2016 7 comments:

This Sewer's Shopping Day in Paris

Paris is only 4 hours away by train, yet I don't get there often enough. My husband recently had a work meeting in Paris so I tagged along and while he was in his meeting I went to visit fabric and notions stores. I didn't buy any fabric (!!) because I already have plenty of fabric and I didn't really see anything special that I had to have. I'm a bit spoiled now by the Dutch fabric markets that come to town and the selection of fabric in my local, German fabric stores. I did buy a few small things. 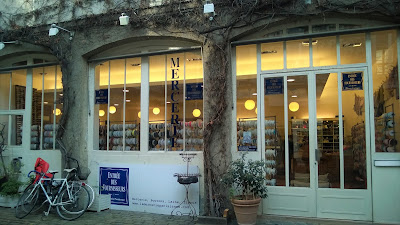 I was hoping to find some woven trim to use as embellishment on a top I want to make but despite the lovely trims and ribbons in this shop, they didn't have what I wanted. But I did find some patterned elastic. I have a pair of RTW jeans (Levis, I think) that have patterned elastic sewn onto the inside of the waistband, and I think it helps to keep the waistband from stretching out or gaping. When I saw the checkerboard elastic I thought I'd try that treatment in pants or on a skirt waistband.

On my way to my next stop, just north of the Pompidou Center, I came across a lovely little shopping arcade called Passage du Grand Cerf. The stores in it are artsy-boutique places selling old items for decorative purposes or newly created art pieces. I of course spied the knitting and fabric store: Lil Weasel. 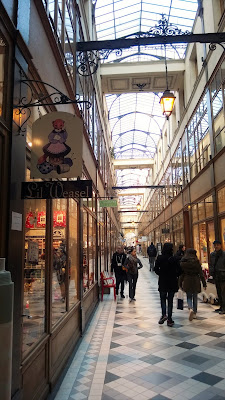 The knitting store on the left side carries a nice selection of yarns as well as embroidery threads and notions, but nothing grabbed me, and I'm trying to curtail my "travel yarn" anyway. They have a fabric store on the right side of the arcade but it's mostly fabrics for quilting or making baby things, neither of which I was interested in. But I still enjoyed browsing!

Leaving the arcade and walking toward my next stop on my list, I started seeing fabric being sold everywhere. I realized I was in the garment district of Paris, or what remains of it.

Ateliers were sandwiched between fabric sellers, men were loading huge roles of fabric into a van and I swear I was giddy with the "smell" of fabric in the air. But these stores looked like they weren't the type of fabric stores a home sewer wanders into. These looked like places for large fabric orders for making lots of the same garment. Maybe the home sewer can buy fabric there, but with my limited French and not feeling adventurous (or needing any fabric anyway), I passed them by.

My next destination was Sajou at 47, rue du Caire. Sajou was originally a haberdashery founded in 1828, specializing in embroidery, tapestry, bobbin lace, crochet and weaving. The store eventually closed but was re-launched in 2005 to sell these items once again with reproductions of the original designs from the 19th and early 20th centuries. I've always been enticed by their goodies but I think they're a bit pricey and the shipping outside of France is steep. A wonderful friend gave me a pair of their scissors, which are very, very nice, and I was eager to visit their store in Paris. 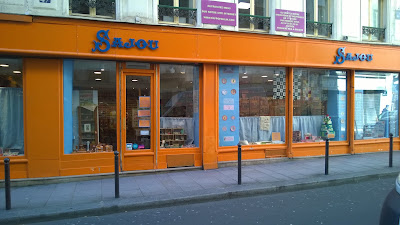 It's an overload of Sajou when you walk in. So many things to look at, so many things to covet. I wandered around the compact store for a long, long time. So long that other customers came, browsed, purchased and left. I was waiting for Madame to question why I was there so long. But she probably quickly figured out I was an American tourist, or at least "not French", and left me to my browsing. I eventually settled on a few items that will be a gift: quilting needles, ribbon adorned with fleur de lis, and a small tin of pins. I bought the thread organizer for myself. Cat and dog winding yarn? A monkey sewing? How could I resist such an image. 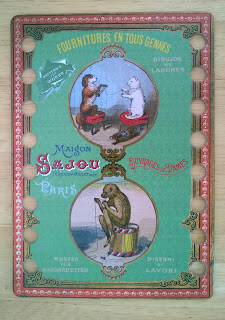 My honest opinion of the Sajou items is that except for the scissors (and I can't speak for the thread since I don't embroider and haven't used it), the reproductions of the images is what you're buying. I don't know that the needles or pins are of high quality, though they look fine. The prices are a bit high I think - 8 Euros for my thread organizer, which is just heavy cardstock with holes...and that silly image of cat, dog, and monkey printed on it (back side too). I do think the store and the merchandise is more for tourists or aficionados of period haberdashery. The storage boxes they sell look nice but they're just small cardboard boxes with a reproduction image pasted on them - for 18 Euros. Still it was fun to visit, fun to browse. I like my thread organizer and I'm certain the recipient of the other gifts will like them too. 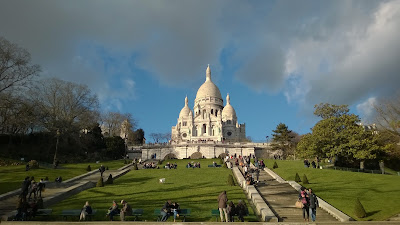 I was a bit surprised to find the fabric shops were crowded. Lots of people - mostly women and not all of them appeared to be tourists. I heard a lot of French spoken. I chuckled to myself when I saw a guy standing outside Reine, waiting and holding onto his wife's (presumably) Reine bag. I also saw a guy sitting on a chair inside, reading a book, probably while his companion shopped. It made me smile because my husband is as patient with me when I'm fabric shopping in Paris.

Despite browsing quite a bit, I didn't find any fabric I had to have, which was a little disappointing but probably a good thing since I have good size stash of fabric already. I did find some small scraps of leather in a bin outside one store, selling for a Euro each. I plan to use them for bound buttonholes or welt pocket details. There are two thicker pieces that I plan to use to make a coin pouch (with that zipper I bought).

I'll leave you with some more images of Paris.