I was looking through my UFOs today to see what projects I should finish before I start something new, and I came across one finished sock and the yarn for the other one. So the question was: finish the second sock or frog the first one? It turns out there was a reason there was only one sock and the project was abandoned to languish among the UFOs.

I tried the sock on and there were so many things wrong with it, I questioned why on earth did I even finish the first sock?
I thought about ripping it back to the foot and reknitting it but this didn't seem like a good solution either, mostly because I took really, really poor notes on this project. Stuffed in with the finished sock and the rest of the yarn, was a photocopy of some pages out of Sensational Knitted Socks. But there weren't any notes on the paper and I didn't even identify the stitch pattern I used (there were 4 or 5 stitch patterns on the photocopy). I keep a little black Moleskine book of my knitting projects and flipping through it I did locate what I think is this sock. But all it says is "Crosshatch Lace", Lorna's Laces, and 60 stitches. Oh and the date I started it: 12/26/2010. Yes, almost 5 years ago. I did write down the stitch pattern chart, but I don't know what needle size I used, what I did for the heel or anything else that would help me make a second sock to match the first. The project isn't on my Ravelry page and the yarn wasn't even recorded in my stash.

So, I frogged it.

It's always painful to rip out a project. I try not to look at it as the yarn pulls through all the stitches...every single stitch that I made by hand. I just get it done quickly so that once it's ripped out, it's over and done with and there's no going back. I wound the yarn onto my swift and misted it with water to get the kinks out.

The funny thing is that I have absolutely no memory of knitting the sock. None. It's as if someone else's knitting project ended up in my stash.

So lesson learned: keep better notes! Oh and don't finish knitting a sock that is clearly not working out. At least I didn't have a second sock started. But sadly this isn't the first time I've kept poor notes...or kept knitting despite signs that it would not fit the way I want. Clearly these lessons are not being learned!

The third summer top is not my favorite and the fourth, well that review follows this one. 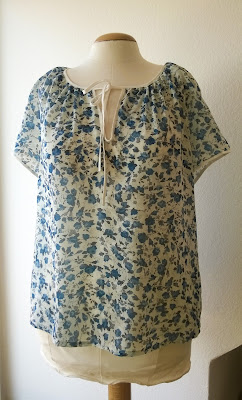 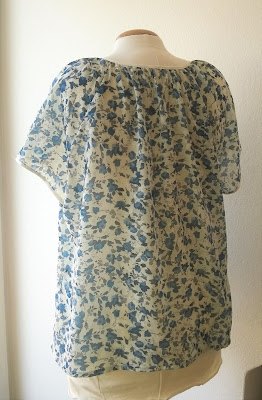 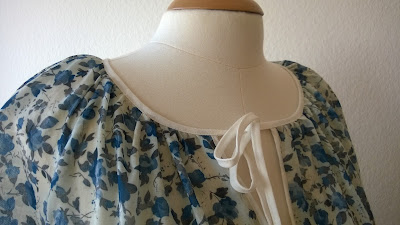 Pattern description:
Short sleeved blouse with darted, raglan sleeves and a front keyhole. The neckline is gathered and secured by bias tape that ties in a bow at the front. European sizes 34-42.

Pattern notes:
I cut a size 42. I increased the side seams starting at the waist and increasing to about 1/2 inch at the bottom edge. Knowing that Burda tends toward low cut in the front, I raised the front slit by 1 inch.

Construction notes:
I used the sewing machine for all construction. Except for the dart on the sleeve, I sewed French seams throughout to create finished seam allowance edges because the fabric is a bit translucent and I didn't want to serge the edges and have them show, though I did use the serger to finish the raw edges of the sleeve dart.


The pattern uses lots of bias tape to finish the sleeve edges, the neck edge, and to act as a tie for the front. I first tried packaged bias and that was far too stiff, almost like paper. I thought maybe the bias tape had sizing in it, so I rinsed a sample, which softened up a little bit, but the bias binding was still too stiff. I could have made bias strips out of my fabric, but I wanted a bit of contrast, so I looked for some lightweight cotton. I didn't have any in my stash and the best I could come up with at a local fabric store was some off-white linen. I cut 3 cm wide bias out of the linen and that worked ok, still a bit stiff though. Wish I'd held out for some cotton instead. The fabric store had some pre-made bias in a color that would have worked but the fabric was silky - maybe polyester or rayon. I wish now I'd bought some of that and experimented with it. At the time I had "off-white" stuck in my head and they didn't have any of the pre-made bias in off-white.

The instructions say to use 1/2 inch, pre-folded bias. But when I used the bias marked on the package as 1/2 inch, (double folded) the result is a 1/2 inch finished binding - much too wide. In fact the instructions say that the finished binding should measure 1/4 inch (6 mm). So you really want to buy the packages that say 1/4 inch. Actually you don't. That packaged stuff is too stiff for use in garments!

The neckline instructions call for gathering the front neck, shoulder and back neck edges, each to a certain width. I did this, tried it on, and determined that the resulting neck line was too high for my liking. So I let the gathering out a bit (about 3-4 inches more than called for) and then attached the bias binding to this new dimension.

Overall impressions:
Possible new techniques for a beginner:
Lessons learned:
Recommend it?
If you're looking for a voluminous, raglan sleeve top, with bias trim, then this is perfect, but I recommend checking the dimensions first. Also, make your own bias binding!


And now for the last, summer top. I didn't finish the last top because it's not fitting right in the sleeves and there looks like a problem with the back neck.

Pattern description: Sleeveless top with v-neck and twisted shoulder straps. The top is intended to be cut out of a double layer of fabric so that the wrong side of the fabric is not visible.

Pattern notes:
Based on my measurements, I cut a size 44. I increased the hip circumference by increasing the side seams starting at the waist and increasing to 5/8 inches at the bottom edge. I eliminated the front and back seams and traced one front pattern piece and one back pattern piece.

Construction notes:
I used the sewing machine for all construction. I sewed French seams throughout because I didn't want any raw edges nor did I want serged edges to show.

Because I sewed French seams, it was a bit of a puzzle at times. My fabric did not have a wrong or right side but it was very thin, so although I could have done one layer, it would have been too transparent. Sewing the French seams, I had to keep track and remember: "wrong sides together first, then right sides". Further complicating matters was that I chose a plaid fabric.

When I went to sew the shoulder seams I found two problems. First, my front shoulder strap width ended up wider than the back where it would attach. Then, when I tried it on, it did not fit.

Progress thus far...
I carefully matched the plaid and was feeling good about this top until I tried it on before sewing the shoulder seams. If only I'd made a muslin, or at least basted it together first to see how it would fit. The top is too big at the armholes and maybe too low in the front too. There might also be an issue with the back neck, as it looks too high on my dress form. I think I was so distracted by the challenge of matching the plaid that I didn't even think to baste it first, let alone make a muslin. It might work as-is if I wear a tank underneath, but I don't want to wear it that way, so I'll need to make some adjustments. But now it is fall so I am leaving this as a UFO until the spring when I can approach it in a better mood about it and can assess the alterations I need to make. I do think it will be a cute top when finished and I look forward to wearing it next summer.
﻿
Posted by Lori on 10/05/2015 3 comments:

Here is the second summer top I made - Simplicity 1884. 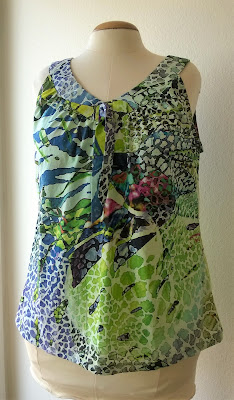 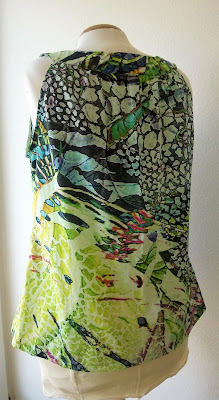 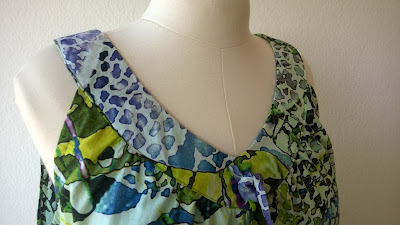 A summer top. Yes, I know it's October.

Even thought it's fall, I pushed forward and finished my summer tops, well three out of four. The fourth one was not fitting right so I'm leaving those alterations until next spring because I'm frustrated with it and well, it's fall.

So here is my first top and review: Simplicity 1668. This is my favorite of the three I finished. I could wear it under a jacket, so it's not just a summer top. 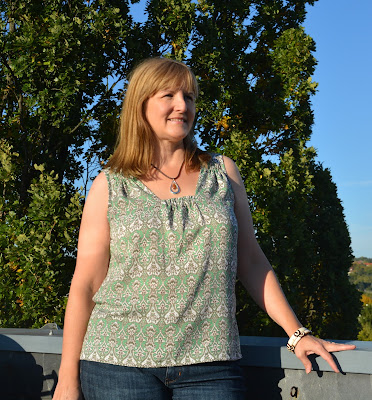 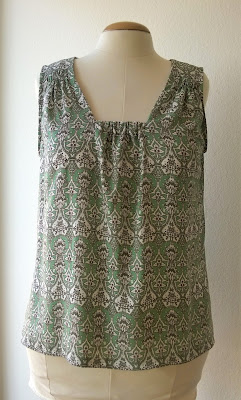 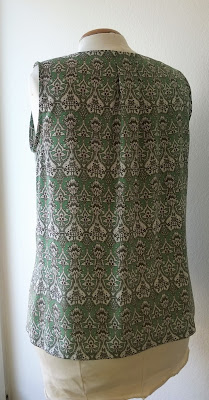 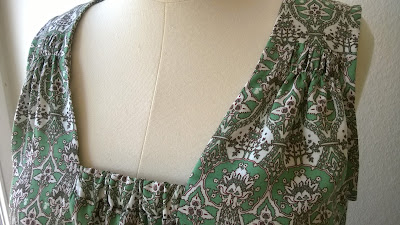 Pattern notes:
Having read other reviews that this top was generous, I cut a size M with a L hip (increased front and back side seams starting at the waist and increasing out to 1 inch at bottom edge)

Construction notes:
I used the sewing machine for all construction. I used a 3-thread overlock stitch on my serger to finish the side seams, edge of neck facings and also the bottom edge before hemming. The arm holes are finished with a bias binding facing - I cut bias strips from my fabric instead of using packaged bias binding.

The front neck was a bit of a trouble. The first time I sewed it, it came out crooked, which I noticed when I went to attach the neck facing. Somehow one side was longer than the other. I actually wasn't surprised because there is potential for adding error when piecing the front shoulders, or my fabric could have shifted during cutting, or the 90-degree angled front neck edge may have not been sew correctly. I unpicked the seams and found that I'd sewn the front neck piece on a bit crooked so I fixed that and fudged the rest of the smaller differences. Problem solved - or at least it's not so obvious now.

The instructions for applying the bias tape to the armholes are brief and weren't enough for me. Actually I had an added problem because I was sewing this pattern as a Simplicity reprint in the German magazine "Meine Nähmode", so my instructions were translated into German (thankfully they kept the illustrations!). But that aside, I've actually never applied bias binding as a facing. I've used bias binding a lot as an edge finish in knits but in woven garments the neck is often finished with a facing piece and I haven't sewn sleeveless garments before, so this was a new technique for me. Some of my sewing books showed better instructions but ultimately a YouTube video made it all make sense. It turns out that it's very easy to do and makes a nice finish.

These might be new concepts for a beginner:
Lessons learned:
Overall impressions:
I really like this top. There was a lot of "fiddly" construction but it was worth it in the end for the nice details: gathered detail on the front shoulders, gather bit at the neck front and the vent in the back. The fit is good and I think I nailed the fabric - a flowy rayon. Funny too that this was a remnant piece that I picked up for less than $7.