Britex fabric store in San Francisco has a blog, and their latest post is about tips and tricks for sewing a silk blouse. Really good stuff!
Posted by Lori on 3/30/2013 No comments:

Knitting gifts from a while back...and some videos

I finally got around to uploading some pictures of a couple of knitting gifts from...oh, last fall. Talk about lazy! But I made up for some of that laziness today by recording TWO videos on knitting cast on techniques for left handed knitters. I will admit that I only thought about making the video because I forgot how to do one of the techniques, and since there aren't too many instructions out there for left-handed knitters, I thought I'd make a "real" video and upload it to YouTube for other left-handed knitters out there.

First the knitting gifts. I made this hat for a friend who likes to play guitar. The yarn is "Allround" by Wolle Rödel, a German yarn I bought locally. I used a pattern, which was created by a German woman, coincidentally. I bought it from Revelry. I don't know if you can tell that the motif above the musical notes is a row of guitars.

Ravelry info
The other gift is a cowl. The pattern, available here, is called "Burberry Inspired Cowl Neck Scarf," because the designer was inspired by one she'd seen sold by Burberry for $750. Yes, $750. I made this scarf out of  Lana Grossa Alta Moda Cashmere, which is actually a wool/cashmere blend. The cowl has large cables knit into it to give it some texture.

Ravelry info
And now for the videos. The first video demonstrates the "Old Norwegian Cast On" - also called "Twisted German" or "Elastic Long-Tail." This makes a stretchy cast on edge. This is the cast on that I couldn't remember how to do and after only finding videos of the technique for right-handers I thought I'd make one for left-handers.
After having some fun making this, I thought I'd make one for the regular "Long Tail Cast On."
﻿
Posted by Lori on 3/29/2013 1 comment:

A visit to Prague

Prague was bitter cold this last weekend, but we endured it to see the Easter markets, which were not too different than the Christmas markets actually - hot wine, beer, and regional food specialties and treats mixed in among stalls selling tacky souvenirs and gifts. The common treat was a spirally wound strip of dough cooked over an open fire that was rolled in sugar and almonds. The "it" item of the market were the intricately painted eggs.

Unlike many cities in Europe, Prague was not extensively damaged during WWII, so the buildings you see are original and not rebuilt; however they have been restored over the years, particularly since the revolution in 1989. The architecture is quite a mix of Italian, German and Austrian influence with a heavy dose of Art Nouveau. We are always looking up when we walk through the streets and are delighted to find interesting facades, stonework and decorative painting on the buildings.
Posted by Lori on 3/25/2013 No comments:

I was shopping in the discount grocery today and look what I picked up along with my milk and bananas: 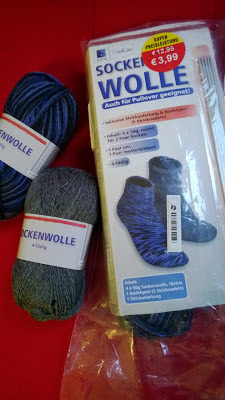 The yarn isn't too bad actually - 75% wool, 25% poly - and it comes with free double point needles. The needles alone would cost at least 4 Euro so I couldn't pass it up. I almost bought two. The other color choice was light tan and light blue striped, but I didn't need that much sock yarn or double points.

Yarn in the grocery! Good thing they don't sell fabric too. Although one of the department stores does and that's temptation enough whenever I'm there, which is often because the grocery I usually go to is in the basement.
Posted by Lori on 3/13/2013 No comments:

What I did this winter

No fiber projects to post. Sorry. I have been knitting (and frogging) quite a bit but don't have anything to show yet. The only sewing I did was to make a couple neck gaiters out of fleece scarves. I simply cut the scarf and made a tube by serging one edge. We needed them for skiing and I refused to pay lots of money for a scrap of fleece!

I have been having a great time skiing this winter and want to do more. I'm actually a little sad that it's warming up outside! We went to Austria this weekend for some cross country skiing, and although the conditions weren't ideal - a bit slushy and icy in spots - we were so pleased to see that there are trails everywhere in Austria. You can just park your car and get out and follow the tracks into the woods, across meadows, and next to rivers and streams.

These are some pictures from this season's skiing, both cross country (nordic) and downhill (alpine), in the Austrian and French alps. 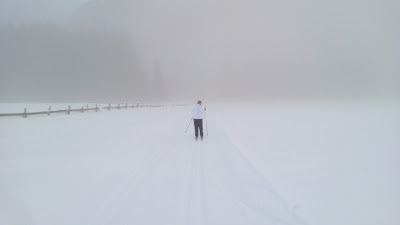 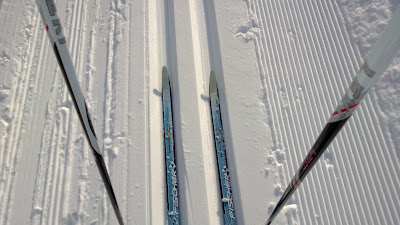 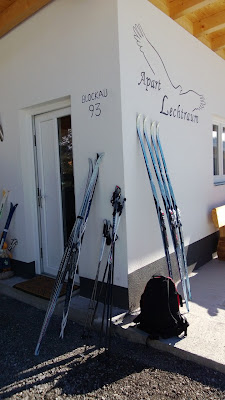 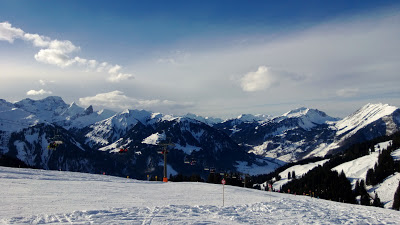 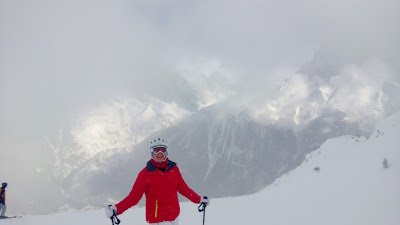 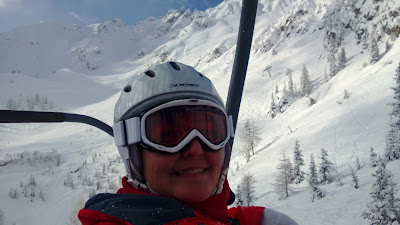