Still no sewing and crafting going on here!

The sewing/computer room is almost done. The furniture is all in place, except that the doors to my cabinet are still out of stock at IKEA. I'm slowly moving all my stuff back in - and oh my do I have stuff! I want to take pictures but I want the room to look finished (and neat) when I do, so it'll be a while. I'm out of town this weekend and most of next week so I'm afraid it'll be February before I get to it.

This weekend I finally packed away the Christmas stuff, well the majority of it anyway. I spent most of Saturday on the ice - and not the ice outside because it's not cold enough here for that. My husband and I went to our usual ice skating lessons on Saturday morning and then I attended a skating fund raiser for Luke and Laura Munana, a brother-sister ice dance team with dual US/Mexico citizenship. They're hoping to make it to the Olympics next year, representing Mexico. They are the Mexican National Champions and just won the senior-level International Ice Dance Cup in Vienna last week. In a few weeks they travel to Korea to compete at the Four Continents competition. Luke occasionally helps teach footwork skills to our Saturday morning group of adult skaters. He's quite talented and I'm very pleased to see that he and his sister are now training with former Olympic gold medalists Sergei Ponomarenko and Marina Klimova.

Between work, working out at the gym, skating, and oh yeah, sleeping and eating, there isn't much time left for knitting, sewing and crafting! Our endless home improvement projects don't help. Now that we have the "playroom" pretty much finished, we are turning our attention to the long awaited backsplash in the kitchen. We're going to tile it in travertine tiles to match the travertine floor. And typical for us, we're already discussing the next big project: the front of the house. The next bit project was going to be a complete redo of the master bedroom/bathroom/closet but the front of the house is looking neglected and downright awful. And it doesn't just need a good painting. The front is covered with brick and siding while the sides and back are stucco (the linked picture is 6 years old by the way). We have some old termite damage on some of the siding and of course since the house is almost 40 years old, we can no longer get siding to match. We'd like to replace the siding and brick with stucco... and while we're at it maybe we'll put in a bay window in the front. Ugh. Am I ever going to get back into the sewing room? Fortunately, my husband has agreed that redoing the front of the house is not a job we should tackle. Thank goodness!

Yesterday I spent my lunch hour driving over to my HMO to get some medical records and of course the office was closed in observance of Martin Luther King Day. I was bummed to have wasted my time (why didn't I call first?) and since I was already out I figured I might as well stop into my favorite hobby store. I found this great book on making miniature food from Sculpy-type clay: 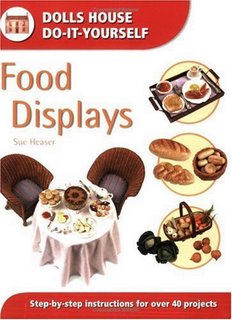 I also bought this cute miniature kit. It's plastic but I think it'll be fun to put together and will look great in my dollhouse or in a sewing room vignette : 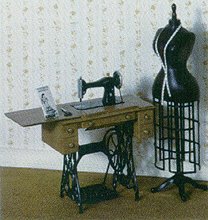 And I also bought a teeny tiny iron to go with the ensemble.

A much better solution

I have been thinking about getting really cool fabric to cover some bulletin-board type design panels for the sewing/computer room...and wasting a lot of time on the internet looking at fabrics. While some of the fabrics would work great, the ones I really want cost a lot and I really don't need to buy more fabric. Then the lightbulb came on. I have these stencils. I have fabric paint. Simple. Cost effective. Creative (I hope). Problem solved.
Posted by Lori on 1/16/2005 No comments:

Surfing the Internet for just the right fabric for the fabric-board is proving to be too much fun! I found a few more (click for a larger picture):
1. 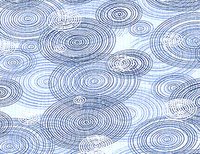 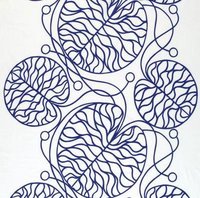 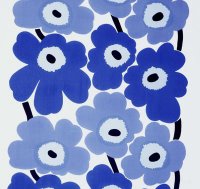 The last two fabrics are Marimekko and they're more than I wanted to spend on this project - it'd cost about $60. Way too much for essentially covering a bulletin board. Yes, it is art as well, but not if I cover it with pattern pieces! If I'm going to spend that much, I would buy a twin size sheet from this bedding and use it: 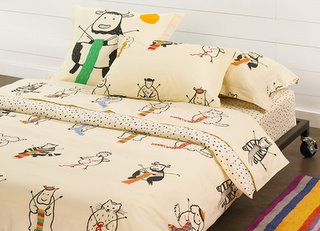 I love this sheet set, but I just can't bring myself to buy it because it'd be the most I ever spent on sheets and well, they are silly sheets. Cute though! Even buying a set for the guest room isn't worth it because the cats think it's their room and the duvet would be covered with cat hair in one day.
Posted by Lori on 1/13/2005 No comments:

I want to sew!

I'm getting antsy for the sewing/computer room to be finished. We hope to be able to move things back into the room this weekend. Last night my husband put two coats of polyurethane on and it needs about 3-4 more. It's water-based polyurethane, so that's why so many coats.

We went to IKEA on Monday and yes, I had some meatballs although they were off of my husband's plate because I chose the 3-salmon salad instead. We ultimately decided to buy more of the Effektiv storage units instead of just shelves. We bought five of the units - one for drawers and four will have doors, two units with beech doors and two with aluminum doors. A much more expensive option than open shelving, but it will be much nicer to have my books and stuff put away. We'll have to go back to IKEA in a few weeks (oh darn!) because the aluminum doors were out of stock.

I've also been thinking a lot about what to do with the fabric-covered boards I have. I plan to put these on the wall to the left of the closet and behind the door. I don't know whether to recover them in white fabric, yellow fabric (would match the hallway color), or a print. I've used these boards primarily to hold pattern pieces or cut-out fabric pieces and not really as a design board so a print would be ok. I've been checking out quilting fabric on line and here are some possibilities: 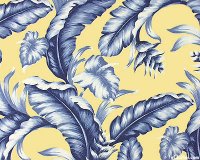 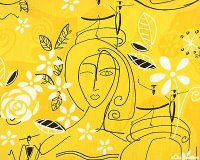 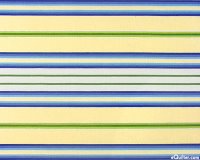 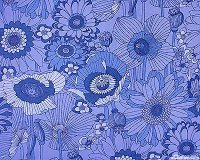 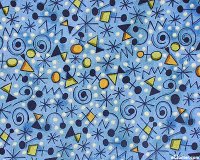 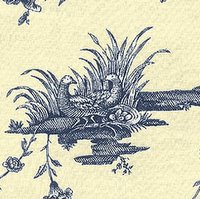 Number 1 and 6 seem to match the best and would tie in the yellow of the hallway, but they're rather conservative. I like the bold print of number 2, but the yellow is a bit bright. Stripes are kinda cool. I don't think number 4 and 5 are the right shade of blue, but I like the patterns.

I also should look through my stash - I think I have two cotton or linen fabrics that might work ok. Imagine that, using stash fabric! When I mentioned to my husband that I wanted to cover the boards in fabric, he said rather sarcastically "Gee, we don't have any fabric for that." He didn't seem very pleased when I said "Oh, I don't think I have the right fabric."

We stained the floor last night. Not much other progress on the room I'm afraid. I had a terrible headache all day on Saturday so I couldn't do much but lay on the bed or sofa. I did get quite a bit of knitting done on kitty bed #3 though.

We hope to get the floor polyurethaned this week and by next weekend we should be able to install molding and reassemble the room. In the old sewing/computer room, we had a lot of the bracket-type shelves on one wall - the kind where shelf brackets fit into vertical metal bars. While it's nice to be able to change the configuration of the shelves, they are fairly utilitarian...and we didn't really have normal shelves. We economized and recycled the sides of an old particle board wardrobe into shelves. Our new room deserves better. So it's off to IKEA tonight for some snazzy shelves to match the rest of the office decor, which is also from IKEA.

I love pilgrimages to IKEA! I'm already looking forward to the tasty meatball dinner in their cafeteria. We're fortunate to have two IKEAs in our area and the newest one is sort of on our way home from work. When the first one opened we waited for a year for the crowds to die down and then drove the hour to get there. It was still crowded and took us 45 minutes to find a parking space. But we succeeded in getting the furniture...and a bunch of other stuff.

I remember the first IKEA built in the US - it's the one in Valley Forge, Pennsylvania and was built in the mid 80's. I recall that even though it was a new idea in both furniture style and shopping, the store drew large crowds. I loved the affordability and smaller size of the furniture and longed for IKEA to build a store in Colorado where I moved to after graduating college. On a trip home to visit my family I went to IKEA and found the perfect china cabinet. It was just the right size, was priced for my budget, and matched the pine table I already had. But how to get it all the way out to Colorado? The flat-packed box was too large and heavy for UPS so we shipped it by bus. Yes! Greyhound bus! It took over a week but the shipping was reasonable and the box arrived in excellent condition. I still have the now 15-year-old china cabinet but it's in the guest room and stores back issues of Martha Stewart Living, Sew News, Threads...and of course some fabric.

We haven't worked on the sewing/computer room this past week. We've been too tired when we come home from work and I haven't been feeling well, so we've been just catching up on TV in the evenings. But here are some pictures of the progress we have made: 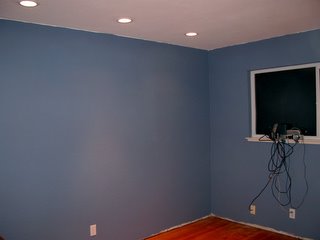 All the cables and stuff on the window sill is the reason I can still log on. That's our router and wireless connection. I duct-taped them to the window sill so they won't fall down. We can't be without our Internet connection! 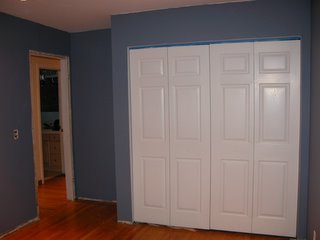 All the sewing and computer stuff is in the guest bedroom. Good thing we do not have any guests visiting any time soon! 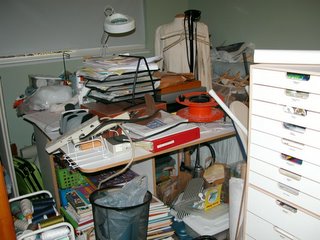 I hope we can finish the sanding and at least stain the floors this weekend, but right now I have a whopping headache - probably due to these nasty storms that are coming through the area. So much rain!
Posted by Lori on 1/08/2005 1 comment:

Crafting things I'd like to try or work on this year...or in my lifetime:

And all of this is in addition to the unfinished miniature quilt, various clothing projects, home dec plans, and knitting projects. I'm not trying to do to much, am I? Ha!

Of course none of this will be attempted until we finish the sewing/computer room. We have put in the lights, painted the walls and ceiling and sanded the floors. Next up: finish sanding, then stain and polyeurethane the floors.