I finished knitting two cowls. I prefer cowls to open ended scarves because I hate when scarves unwrap themselves or they get caught up in my coat when I try to unwrap them and I feel a bit strangled.


﻿
I used yarn that I bought during our trip to Edinburgh, Scotland in July. It's actually two yarns: a wool/silk blend from Eden Cottage Yarns and mohair/silk blend from Woollenflower. I bought the two yarns intending to combine them and make a cowl like this. The pattern is from Ravelry, it's called "That Nice Stitch." 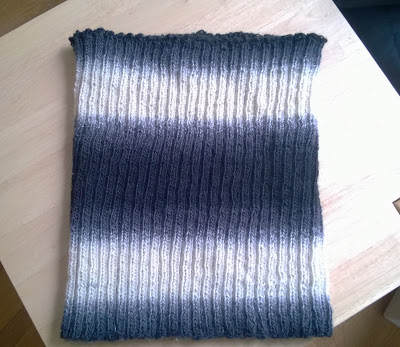 This cowl uses about 1/2 to 2/3 of a skein of Zauberball, which is a German yarn that comes dyed with this gradient effect. I bought the yarn in a yarn shop in a small town outside of Stuttgart a few years ago. The shop had a cowl made out of it, which caught my eye so I decided to make one for myself. The woman in the store told me it was just a cast-on of 200 stitches on size 2.5 mm needles (US 1 1/2) and a 2x2 rib (2 knit, 2 purl) - no pattern needed.

In other knitting news, I'm almost finished with a second sock, I'm blocking the pieces to a sweater I recently finished knitting, and I'm casting on to make myself a vest. Busy needles!
Posted by Lori on 10/12/2016 No comments:

Making my own trim

When you can't find the trim you want in the store, you make it! I haven't done this just yet - I'm still learning and practicing weaving bands on my inkle loom, but I have an idea of some trim I want that I hope to make soon. 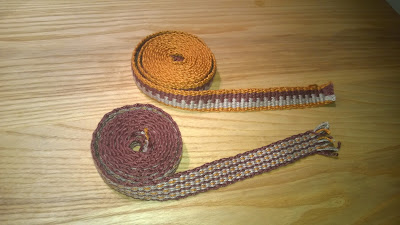 I wove them using cotton crochet thread (I think it was size 5). The bottom band was my first piece and the top band was woven to use up the thread - I don't like the color combination on the second one as much. These are warp-faced bands, meaning that the warp thread (length wise grain) is what is visible and the weft (cross grain) is only seen on the edges, so you want to design the band to have edges the same color and then use that color in the weft. I used more brown in the bottom band and very little gold, which meant I had a lot of gold left over for the weft for the second piece. I don't have any plans for these but they're thick and sturdy and would make great bag straps or even a belt. The bands are about 3/4 inch wide. The bottom band is 4 feet long and the top is 6 feet. The maximum length I can make on my loom is about 7 1/2 feet.

Here's what the inkle loom, made by Schacht, looks like warped with my current practice project. 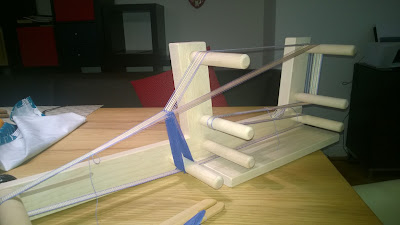 The blue threads are heddles - loops of cotton thread wrapped over every other warp thread so that you can easily separate the warp threads for weaving. Half of the warp threads go over the top peg (those are the ones held with the heddles) and the other half pass below the peg. The warp threads pass around the pegs in the loom to make a continuous loop. The warp is tensioned using the adjustable peg just barely in view in the bottom left of the picture. You weave between the tensioning peg and the heddles until you get too close to the heddles and have no more room to pass the shuttle through, then you loosen the peg, advance the warp by shifting it along the peg-path, tighten the warp again, and you're back to weaving. Easy!

For my current piece I'm using size 8 pearl cotton thread, which results in a shinier band that is about 1/2 inch wide. It's more like ribbon, or at least closer to what I could use as trim on clothing. 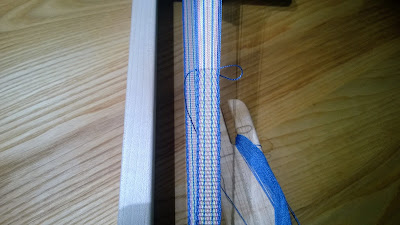 It's good to practice because it takes some time to learn how hard to beat the weft (not too hard with pearl cotton or you lose the shine) and how to make the selvedges neat (patience!). I also am learning a little bit about how some color combinations work or don't. In this band you can barely make out that there is yellow next to the pink or that there is a yellow dot running down the center. It seems that one or two strands of the warp thread was not really enough to make the color stand out. But I do like the results!

These first three bands I made were woven in plain weave, which is fast and can result in a sturdy band but you're sort of limited to stripes, checks or repeating little clusters like in my first band. With a technique called "pick-up" you can weave all kinds of design elements and motifs, including lettering. It's more time consuming because you have to select warp threads individually according to a chart. That's going to be my next project.

I never thought about weaving my own trim and bands for sewing purposes but of course that's how people used to make them, and I know Chanel has their trim custom woven for their couture suits so that it matches the fibers of the suit fabric. It's really not hard to weave bands and surprisingly not that slow. In about 20 minutes I can weave around a foot or so, though it'll probably be longer doing pick-up. The most tedious part is deciding on and planning out the design. Warping the inkle loom takes a little time but it goes pretty quickly.

The design possibilities are nearly endless. I've seen some bands woven with embroidery floss, which can provide beautiful color combinations. Some have even used sewing thread to weave bands, which I will probably try since I love a challenge and can envision that the resulting thickness and width would be perfect for trim. I'd also love to weave with silk, perhaps making something wider that I could use as a belt or sash. So many things to make!
Posted by Lori on 10/03/2016 4 comments: