I finished the second top today. They're getting easier. 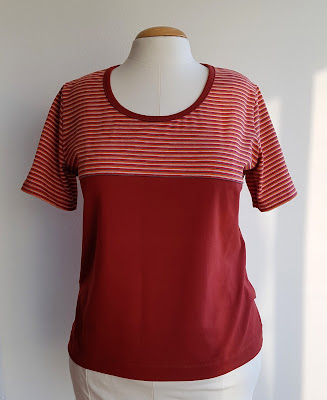 The funny thing about this top is that although it looks very coordinated in the picture, the red in the stripe is brighter than the red in the bottom, which is more a burgundy color. I think this happens because the red stripe is next to dark gray so it reads darker. When I put the stripe fabric against the orange from the other top, the stripes looked overall redder to me and I didn't like the look, even though one of the stripes is orange and matches the solid orange fabric exactly.

And yes, I changed my mind and went with stripes on top. I went back and forth but decided that maybe I wouldn't like all the horizontal stripes across my already wide stomach and hips and perhaps the strips at the shoulders will balance out that wideness.

One down, one to go

I finished the orange t-shirt and I'm pleased with the results. 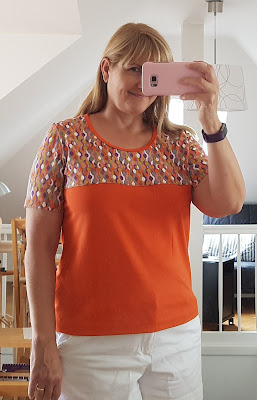 My mock-up was pretty accurate to what the finished top looks like: 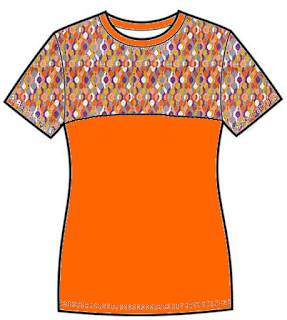 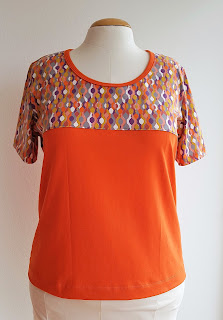 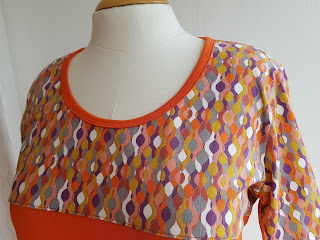 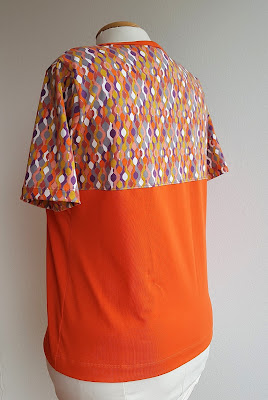 The fit is great. This is the third t-shirt I've made from this pattern (Jalie 2566) and each has come out a little different due to the fabric, but overall this pattern, with my alterations, works well for me. The fabric came from the Dutch fabric market that travels around Germany and it's a really nice, smooth knit in a good weight.

BONUS! I managed to squeeze in a pair of briefs (Jalie 2564, out of print) when cutting out the print fabric. I think if I can make it to the next fabric market, I will buy more of these 1/2 meter cuts (that's the way they sell this fabric) to make more underwear.

A while ago I bought some knit fabrics from the traveling fabric market. They're 1/2 meter cuts and I envisioned combining them to make a t-shirt. But except for one shirt I made from a Knipmode pattern, the rest have been sitting idle while I tried to decide how to combine them.

Here are the prints: 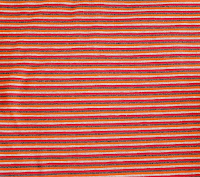 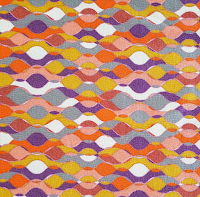 And here are the solids - I just put the colors here because the photograph of the fabric didn't really match the true color: 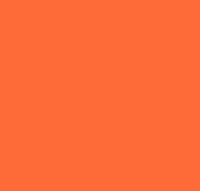 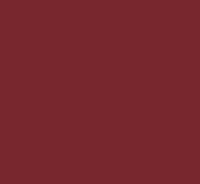 I tried to think of ways to combine them but wasn't having much luck moving the fabrics around on the cutting table, holding them up to me in the mirror or draping them on my dress form, and I didn't have extra fabric to make swatches. I decided to sketch a design on my Surface (I love that I can "draw" and "paint" on the screen with a pen or realistic brush). I plan on using either Jalie 2566, which has set-in sleeves, or the Knipmode t-shirt from 5/2016 that I used for the first t-shirt with these knit fabrics. I started with a line drawing of a basic t-shirt to represent the Jalie and used the line drawing for the Knipmode. Coloring them in with the solid colors was easy, but I really wanted a way to put the printed fabric into my drawing. I know I could probably do this with Adobe Illustrator, but I don't have that software. After some searching downloadable apps to see how to make my line drawings transparent to make use of them more, I stumbled upon an online drawing program that solved my problem wonderfully, and I am excited to use this tool in the future for planning garments! The program is Lunapic. I had to play around with the resolution of my uploaded fabric pictures, and it's not perfect, but I think it gives me a great way to visualize the top in the fabric.

After using the tool a bit, I decided that I didn't like the look of combining more than two of the prints in one garment and by using them in pairs I would be able to get two tops. Here's what I came up with...now I just have to decide which ones to make! 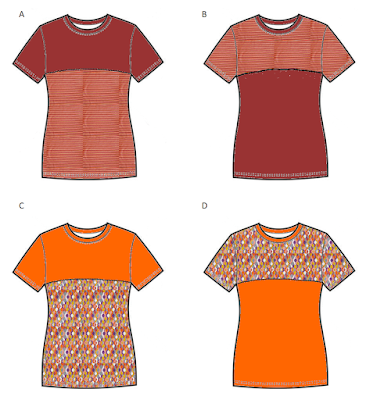 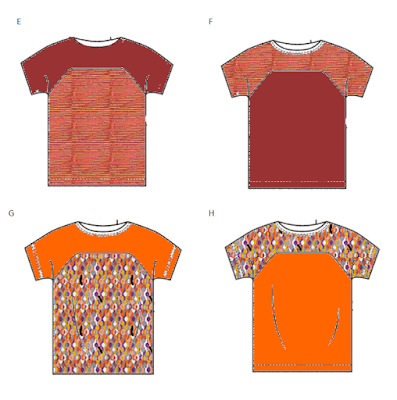 I'm leaning toward A and D using the Jalie pattern. What do you think?

When the drawstring gets lost inside the waistband, use your Fasturn tools to fish it out. 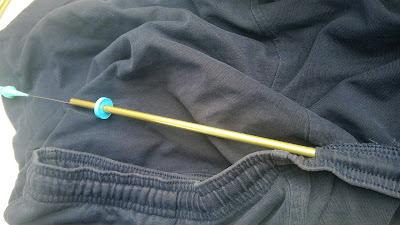 And then I sew the buttonhole opening a little smaller so that the knotted end won't slip inside again. These are my husband's shorts and at least the second time I've fished out the drawstring!
Posted by Lori on 8/22/2017 1 comment:

Sleeping with the fishes

More pajamas. I wanted another pair of summer-weight pajamas but I tried a different pattern this time and kind of wish I hadn't. My Kwik Sew 2811 pattern is a winner while the Burdastyle pattern I used for the top was not. I'm not happy with how they look, but my husband likes them. Of course he also saw how much time and effort I put into these. 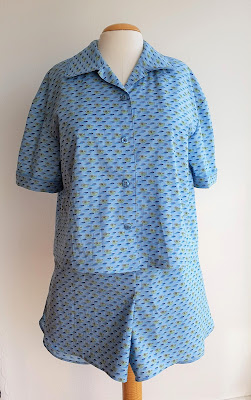 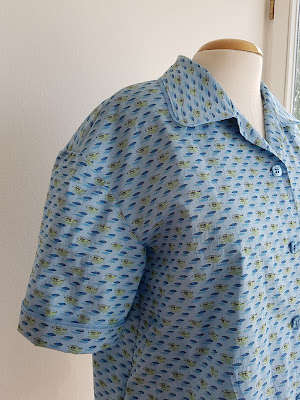 My primary problem with the pattern is with the sleeves. I didn't know they would be so off the shoulder, and I don't like them. The sleeve has a little bit of fullness to it and it just looks weird to me. The Kwik Sew pajama top also has dropped sleeves, but they're not as low. Also, the Kwik Sew sleeves have less ease and could be easily sewn in flat while these Burda sleeves are set in, and I had to run a line of basting to handle the ease. I didn't make a muslin of this pattern because it was "just" sleepwear, and though I did compare the flat pattern to the Kwik Sew to see that it would fit about the same, I didn't notice the wide shoulders. I was really shocked when I put it on and the sleeves sort of poofed out. Some of the poofiness went away after I pressed them, but looking at the model picture and dressform picture, you can see how much the sleeves hang down. 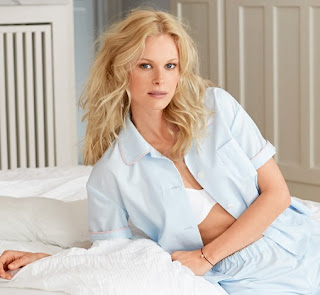 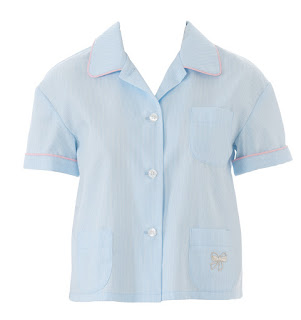 I also think the top is too short. I thought that might happen and would have made it longer, but I didn't have enough fabric.

My main objection with this pattern was in the construction. The collar was really difficult to put in and I think unnecessarily so. The collar piece was rather curved and I fought with it to get it to shape to the tightly curved neckline. The collar on the Kwik Sew pattern is flatter and I never had any trouble with it. The other difference is in how the collars are attached at the back neck. The Kwik Sew collar uses two different pattern pieces, one for the upper and one for the under collar and the bottom edge of the upper collar is used to hide the seam allowance at the back neck. The Burda technique used one pattern piece for both the upper and lower collar and a bias strip to cover the back neck seam allowances. It made for a lot of bulk. I ended up sewing the collar on first and clipping the seams to get it to conform, and then I sewed the seam again with the facing and bias strip in place. It was tough.

Here's a picture of the pattern pieces with my annotation on what's what. You can see (hopefully) where the collar piece matches at the shoulder and then again near the fold of the facing, but the collar has a good amount of curve that doesn't easily fit into the tight curve of the neck. 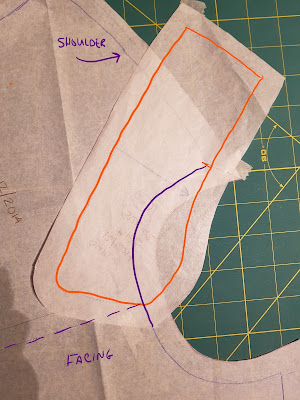 The other changes I made were to add interfacing to the front facings (the pattern only called for interfacing the collar). I also doubled the fabric for the cuff to give it more weight. I left the pockets off because I thought they'd get lost in my busy print. And I didn't want to bother with them anyway!

I used a folded over ribbon instead of piping. I had the piece of ribbon in my stash - it was purchased many years ago at my favorite ribbon shop in Paris, La Mercerie Parisienne , and I finally had a use for it. I thought the shimmery blue looked like water and go well with the fish motif. It was a little difficult to use it for this purpose though as it didn't want to go around the curve of the collar very well. And I found out that the ribbon melted immediately under the iron (I'd tried a sample fortunately!) so I used a press cloth and had to be extra careful pressing the top during construction. But the ribbon trimmed turned out exactly as I imagined it would. 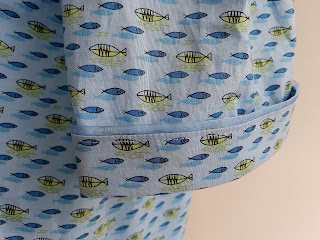 I was also thrilled to find shimmery blue buttons, purchased at my favorite little fabric/button store downtown in Wiesbaden. 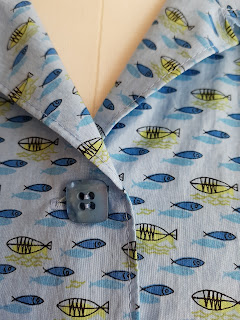 The fabric is cotton lawn that I bought from fabric.com a long time ago. The selvage has "Tori Richard" written on it. A search on the internet shows that Tori Richard makes Hawaiian shirts and they design their own textile prints. Maybe this was a mill end or an unused fabric from their collection.

I will wear these pajamas - after all the work I put into them - but I don't recommend this pattern and won't be making this top again.

The shorts were far easier to sew and turned out well, I think. This is a plus size pattern. Here's the line drawing - just a simple elastic waist and curved bottom hem. 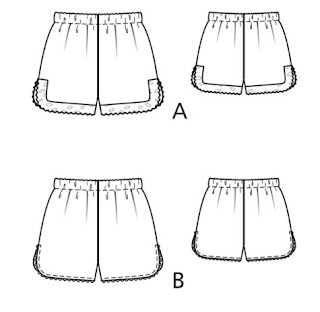 I didn't add any trim or lace to the bottom hem. If I'd had more of the ribbon I would have put that on the bottom, but instead I just made a narrow hem. I used a technique I learned from a Threads video by Louise Cutting. First you serge the curved edge and turn it under, pressing it down. Then you run a basting stitch close to the edge of the curved part and gather it slightly to that you can get it to turn under again. Press and stitch.

Now I can move on to another project. Yay! I have a pattern traced and ready for a Burda robe, but I'm a little tired of loungewear/sleepwear right now.