Settling in and unpacking my epic fabric stash

Well, it's been a while. Let's just say it's not an easy thing to move from Germany to California.

A few weekends ago we finally were able to reassemble some IKEA wardrobes we had bought in Germany and moved to the US. When I bought them I had planned to store both fabric and clothes in them, so I designed them with big pull-out drawers as well as hanging rods. I only used the wardrobes for a short time in Stuttgart - and my fabric stash was actually quite small then - but in Wiesbaden they didn't fit in the apartment so they were stored in the basement cellar. I wish I had more drawers, but they don't make this version of PAX anymore - or the color, so I'll just use what I have.

I spent the last few weekend unpacking many, many plastic storage bins. I had a lot of fabric stored in the states while we were in Germany, and of course I managed to buy more in Europe. I really hoped I could store all of it in the wardrobes but I still have storage bins containing bulky fleece, thick wool, children's fabric (I need to find some babies to sew for!), swimsuit and lingerie fabrics, quilting cotton, fake fur, and home dec fabrics. The wardrobes are filled with some really nice stuff though! I organized them by color because that makes sense to me, and I like the way it looks.

I put wools and suitings on the top shelf - these are mostly black, gray and some pink and fuschia. The next shelf has black and blue fabrics, mostly solid ones in larger yardage in the back. I turned some fabric cubes on their sides to keep them contained but visible. The small bins in front hold smaller pieces of mostly printed knits and lightweight fabrics. The bottom shelf in this picture shows my pink, coral, and yellow fabrics and some more prints. By the way, the puck lights are stick-on battery-operated LED lights. They're remote controlled (and you can set them at 50%, 100%, cool, warm, or on a timer) or you can just push them to turn them on or off. Bought them at Amazon.com! 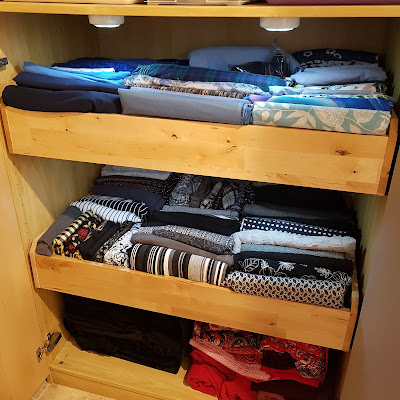 The drawers are full extension. See how nicely I can view and get to my fabric now! 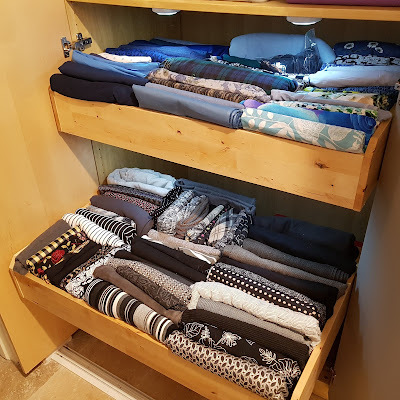 The right cabinet has a hanging rod, so I used that to hang up some pieces of woven fabric. Just some! Haha! The top shelf had my bulkier or not-likely-to-be-used-anytime-soon pieces of brown wools, blends, and knits. 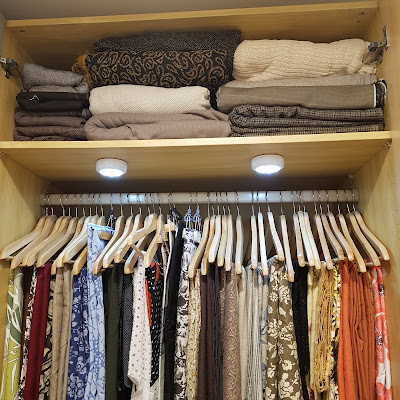 Two drawers on the bottom hold the brown, green, and white fabrics. More white and brown fabric is stored on the very bottom. I do not know why I have so many pieces of plain, white fabric. 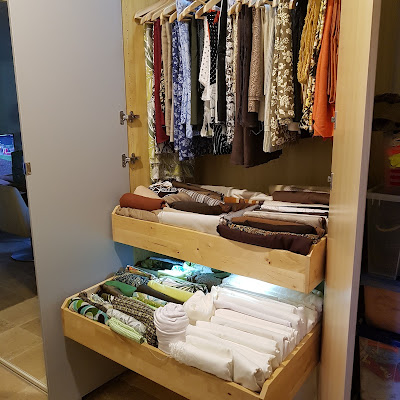 My fabric store is open!

Good thing I have a brand new sewing machine to sew (and embroider) on! 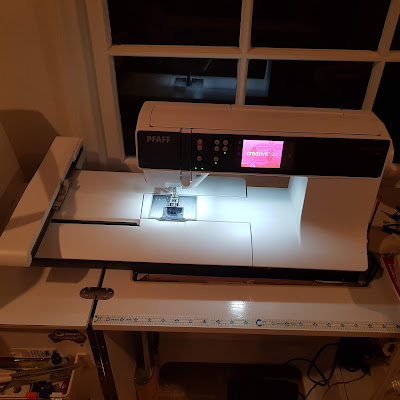 And today I just bought this! 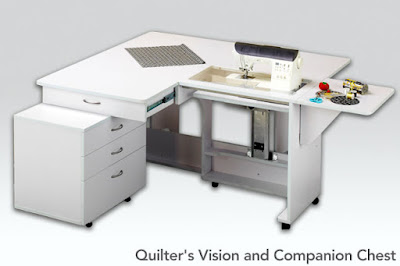 It's from Tailormade Cabinets.

I'm still keeping my Pfaff 7570 but the software to send designs to the machine won't work on Windows 8+. Once I was reunited with all my threads and designs and stabilizers I had in storage I felt the urge to embroider again. And then I saw the cool things a new sewing machine can do, like auto tension and a presser foot that you can raise with a touch of a button or automatically when you touch the foot control - just enough so you can pivot around curves and corner. And it automatically cuts the thread. The 7570 is a great machine though and I won't sell it and since my new machine won't fit in the old cabinet the 7570 gets to stay in its home and I had to buy a new cabinet. I don't have a huge sewing area but the space will work as long as I can move the cabinets and cutting table around when I need to.

I still have some organizing to do before I can return to garment sewing. But I did come across a great little project to work on and practice with the new sewing machine. I found that I had already cut out all the pieces, so it's some Christmas sewing in August! 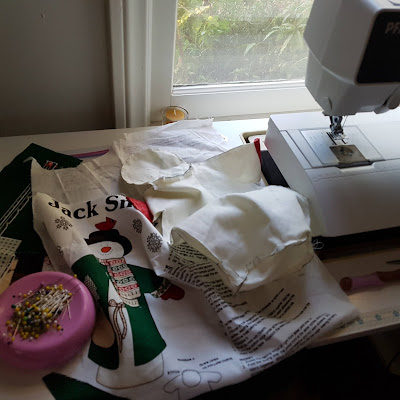 This is the state of my sewing at the moment - an almost finished Burda top (#121 from 9/2010), a sewing repair to my husband's sleep pants, and a growing mess. 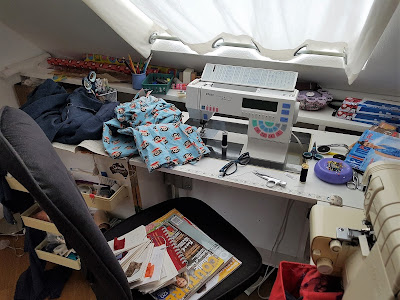 The growing mess is because I'm moving soon. Our European adventure is going to end and we're about to start a new one back in the U.S., which I'm happy about because it means a really great job for me. Of course this will mean less time to spend on all my hobbies, but this job will be worth it and was an opportunity that would probably not come around again.

I hope to finish the top and the repair but other than that I don't think I should start any other sewing projects and should instead focus on getting stuff ready to move. We will have our stuff packed for us, but not all of it will be going back to the U.S. - like most of the IKEA furniture we bought to furnish our apartment here - so I have a lot of work to do to sell/donate/throw away. And we'll have a house hunting trip in a few weeks and some final trips in Europe to do. Busy, busy busy times!

One project I am working on is to finish weaving a scarf that I had started just before I knew leaving was a real possibility. I blogged about it earlier. 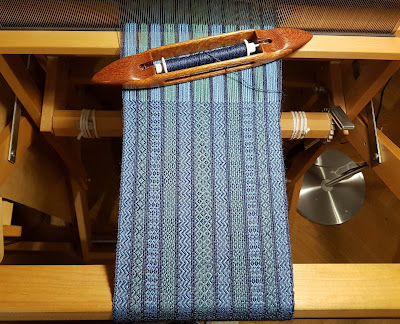 The scarf looks really complicated and it sort of is. First, I did not design this, so the really hard work was done for me. The scarf is from the book Next Steps in Weaving by Pattie Graver. Still, this is the most complicated weaving project I've done so far. But it's like following a recipe, where the ingredients and their amounts are already determined and you just need to apply your skill at working with them.

I had lots of time to knit in December because I flew from Germany to California for an in-person interview right before Christmas, and we made two trips to our place in the French alps (which we are keeping and will be our destination for most, if not all, of our vacations).

First, a shout out to Wollhaus in Pasadena, California. With the evening free after my interview was over, I of course sought out a yarn shop. I was warmly greeted right away and invited to join their knit night, which I did. I immediately felt at home. This may very well be my new LYS and as a bonus, one of the owners is Austrian and can help me translate all those German knitting magazines I accumulated!

I'll leave you with a picture from our recent snow shoeing fun: